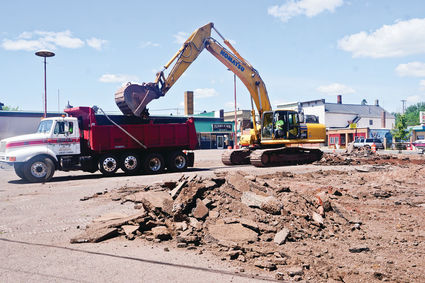 Crews with Ruotsala Construction, start tearing up the parking lot at Aurora and Lowell streets downtown on Thursday to start the Downtown City Square project that is expected to be completed by September.

Bordered by Aurora and Lowell streets and McLeod Avenue, the City Square is intended to be a year-round space to attract more people to the city and to the downtown, said Tom Bergman, director of community development for the city of Ironwood. It is also one part of the larger effort to create amenities that attract more families to live and work in Ironwood, he said.

"They are starting construction," Bergman said, during Thursday's Downtown Ironwood Development Authority meeting. "The pre-construction meeting was held Tuesday as dirt was hauled in for backfill and safety fencing was installed."

Ruotsala Construction, the contractor for the $1.47 million project, brought in heavy equipment on Thursday to start tearing up the asphalt parking lot that will become a park with sidewalks and structures.

The project will include landscaping and green space, an amphitheater for music and outdoor theater, a splash pad that can double as a winter ice rink, food truck and vendor areas, an outdoor fireplace, solar and environmental features, outdoor seating, benches and tables. The space will host community events and continue serving as the "Finnish Line" for the annual Sisu Ski Fest.

The project is scheduled to be completed at the end of September, Bergman said. Now that all of the administrative work is complete the activity on the site will start increasing rapidly, he said.

"Obviously, we want to have as low an impact on the rest of the downtown while construction is going on," Bergman said. "There is a lot of effort being put in for dust control and erosion control and things like that in terms of impact to the downtown."

There will be some construction noise that might impact the downtown during working hours, he said. People should just be aware that a large construction project is happening downtown this summer, he said.

The project was funded through Community Development Block Grant dollars from the Michigan Economic Development Corporation. The city's $191,850 portion is for land acquisition, a CDBG-certified grant administrator and city business route lighting projects.