Anglers come out for Can-Yak tournament 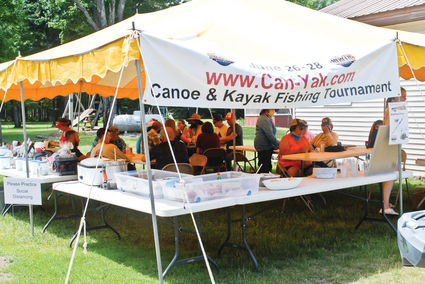 THE CROWD relaxes and socializes while awaiting the results of the weekend's Can-Yak fishing tournament Sunday at Beaver's Resort in Mercer.

MERCER, Wis. - Anglers hit the waters of southern Iron County over the weekend as they took part in the Mercer Area Chamber of Commerce's sixth annual Can-Yak Fishing Tourament.

"It went really well. Obviously, with everything that happened (with the pandemic), we were a little bit rocky starting - trying to figure out promotion and ways to go about it," said Melissa Biszak, the executive director of the Mercer chamber.

Although the pandemic may have complicated logistics leading up to the event, Biszak said the nature of fishing made the actual event conducive to being held in the time of social distancing.

"A lot of the event they do individually ... fishing in their own kayak or canoe, or within their close groups, so it is very limited on the amount of actual public gathering (needed)," Biszak said.

This year's tournament had 38 competitors, which Biszak said was down slightly from the 40-50 anglers the tournament normally has. The smaller number allowed tournament officials to talk to the competitors to determine what they felt safe doing, according to Biszak.

The Can-Yak tournament, which gets its name from a shortened combination of canoe and kayak, focuses on silent sport anglers.

"It's all essentially done by human power only, no motors no nothing," Biszak said. "So it is all silent-sport related, We're trying to essentially just be one with the water - being out there (and) just getting out there and fishing."

Competitors could fish waters in Iron County that are south of County G on Saturday and Sunday, according to the tournament rules, having the option to compete both as teams and individually.

Anglers received points for up to 13 fish they caught and released.

"They're able to have a 'baker's dozen,' so nine panfish and four game fish," Biszak said.

The smallest fish entered in the tournament was a 3.75-inch smallmouth and the largest fish was a 43-inch muskie, both of which were landed by John Brandt.

Brock Morse took first place in the tournament, and was also one half of the winning team along with Josh Klopatek.

Biszak said any money raised during the tournament will go toward next year's tournament.