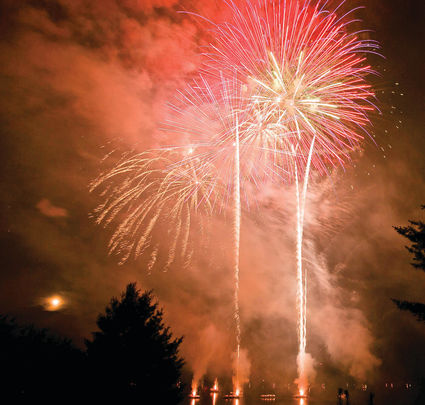 Fireworks light up over Grand Portage Lake as Mercer celebrated the Fourth of July with a large crowd at Carow Park Saturday night.

MERCER, Wis. - With so many Fourth of July events canceled in the area, the Mercer community hosted a large crowd Saturday for its Fourth of July parade and activities.

Melissa Biszak, executive director of the Mercer Area Chamber of Commerce, said there were likely more people than usual but people were pretty spread out and not clustered in one area.

The day started early with the annual Run for a Vet fundraising event at MECCA trails, which was organized by the American Legion Post 424 Auxiliary in Mercer. There were 104 runners and 38 walkers.

"We went into this thinking we would get 75 people total and to get 140 people was really something," said Rebecca Snyder, race director and auxiliary member. "We were really happy to have that many more people show and the general consensus was that the race was fantastic."

The first woman to cross the line for the 5K trail race was Caroline Davis of Whitefish Bay, Wisconsin with a time of 21:38. The first man was Grant Gloeckler of Minneapolis with a time of 19:18.

"We loved doing the race and we're glad to be doing it this year when so many things are canceled," Snyder said.

There were changes to the 5K and 1-mile fun run this year to account for COVID-19 prevention. The race started with groups of five heading out of chutes and continued in 10-second intervals.

For the first time, people who could not attend or had concerns about risks of COVID-19 could register and run on their own and attend in spirit as a "virtual race."

"It allows people who contribute to the charity event," she said. "They also get the T-shirt and swag bag."

The good weather attracted larger than usual crowds for the late morning parade that followed.

"I am so thrilled," said Sommer Walstead about the parade going on as scheduled. "It's a little hot but there's a little breeze that makes it tolerable."

Walstead, of the Madison area, comes here annually to stay at a cabin in Winchester. She brings friends each year to let them see how special the northwoods are as a retreat.

"I've been coming here since I was a little kid," she said. "It's great to come up and see everybody coming together for the parade. It's just a tradition that I hope will carry on for years."

The parade route was extended by several blocks to prevent congestion of crowds as a preventive measure for the coronavirus pandemic.

"It's nice to attend," said Bill Zimmerman, who attended with his wife, Janelle, and their two dogs. "You just have to do the smart thing, that's all."

The Ted and Katie Sibilsky family said they have been coming to the Mercer lakes area for over 30 years.

The Milwaukee family said the change of scenery is what brings them back each year.

"It's peaceful," he said. "It's a change of scenery and we stay to ourselves."

The family positioned themselves at Lakeview Avenue, where the parade has traditionally turned off U.S. 51 to head back behind the downtown and end the parade. They noticed right away that the parade kept right on going all the way past the wood statue of "Claire de Loon" to end the parade by exiting at Garnett Street and circled back around the Veterans Memorial Park.

"I think it was the right way to do it," he said. "People are distancing themselves."

The Mercer Lions were making their way through the crowd to conclude sales of tickets for their 10th annual Turtle River Duck Race on Aug. 8. The 2019 event raised more than $15,000 but this year's organizing got off to a late start due to the coronavirus, said Louise Minisan, a Lions Club member and event volunteer.

"The funds go toward scholarships and community improvements," she said.

Al Breunig, a retired Madison area man with a cabin in Presque Isle, said his children and grandchildren come to stay each year around this time and they like to attend the Manitowish Waters Fourth of July events as it's closer to the summer home.

"It's a different world," Breunig said of northern Wisconsin. "We love it up here."

When the Manitowish Waters events were canceled this year because of the coronavirus pandemic, Breunig said he was pleased to attend the Mercer parade and was satisfied with the precautions taken including the parade route extension.

"It's nice not to be crowded downtown," he said.

Bruenig's family, Jen Peterson and Becky Bruenig, their spouses and children were also in attendance. They came up from Madison to get away from it all, they said.

"We come up here to forget about COVID," Peterson said. "Because on the lake you don't have to worry about it."

The COVID-19 cases were flattening in Dane County, Becky Bruenig said. But Madison is a college town and a lot of younger people are coming down with the virus and the numbers are starting to go up again, she said.

"We don't go to a lot of places but it's easier there with grocery delivery and other services to the home," she said. "We mask up when we do go out."

The activities moved over to Carow Park where the chamber handled beverage concessions, the Mercer Sno-Goers and Pit Crew organizations operated the barbecue and food concession. The chamber also held a 50-50 raffle and the winner will be announced on Wednesday.

The evening started with a DJ who played the anthems for each branch of the military and had anyone who served in them stand during the songs to be appreciated.

"That went well as it matched the theme for this year and led into the fireworks going off," Biszak said.

The local fire department set off fireworks that evening.

The next chamber event will be Loon Day on Aug. 5.