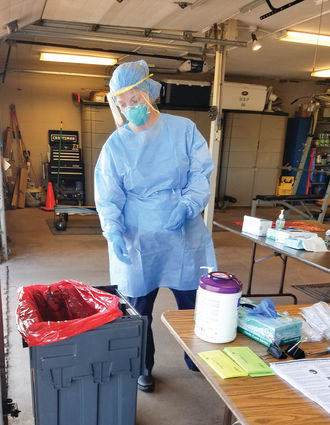 WAKEFIELD - COVID-19 testing was conducted by the Upper Great Lakes Family Health Center in conjunction with the Western Upper Peninsula Health Department at the Wakefield Post of the Michigan State Police on Thursday.

"One of our goals is to bring COVID-19 testing to areas where it wouldn't ordinarily be easy to access, or it allows more easy access to it, and we also want to identify cases in counties where testing has historically been low; so we know if there is COVID-19 in those locations," said Kathryn Kass, a physicians assistant with the UGLFHC in Houghton. Kass administered the tests.

According to UGLFHC clinic assistant Pam Hendrickson, they had a maximum of 40 appointments set for the day and were over-booked for Thursday's testing, but planned to fit in as many walk-in appointments as they could.

Testing moved along with very little line, as people arrived for their appointment by car and stayed in their car for testing. Hendrickson said they perform three to four tests every 15 minutes.

"It goes pretty fast. I think a lot of people like that. too. The fact you don't end up in a long line, even though we are pretty busy. You usually don't end up waiting too long," she said of their testing mobile testing setup which has visited Michigamme, Covington and Gwinn.

According to Hendrickson, the longest wait time is usually only 10 minutes. She said that is rare and usually only happens when they have a couple of unscheduled tests.

Patients received either a nasal or an oral test. Kass said both tests have the same reliability, it is just a matter of what works best for the patient and their supply.

"Generally, (nasal) is preferred, because for the provider, we can stay a little further away which is nice, but it's the same test," Kass said.

Hendrickson said a lot of people seem to be turned off by the idea of the nasal test. She said it's not painful but "it is uncomfortable." Kass said the pain which people say is associated with the nasal swab is actually more "anxiety than symptoms."

"We use all of that to kind of decide how to prioritize them, and then the labs do take that into account, as to which ones they test first," Hendrickson said. "Which is helpful because we do need the people who are having symptoms and who have pre-existing conditions to be tested first. So those that don't meet the higher end of the priority list, their tests do take longer to get results on. It is kind of unfortunate, but it does make sense."

According to Hendrickson, the speed of the tests depends on how backlogged the labs are. If they are behind they are going to run the ones with the highest priority first.

"It depends on a lot of factors, but nationwide there are a lot of backlogs as far as the tests, so it could take up to two weeks to get a test back," Kass said. "But that is not always the case and it matters if there are symptoms or exposure, because in certain situations test results are expedited. It can take a while to get the tests back."

Hendrickson said that patients are not necessarily quarantined upon taking a test. She said it depends on whether or not they are symptomatic. If they are not symptomatic and haven't had exposure they wouldn't necessarily need to quarantine.

MSP Sgt. James Revoyr said that they will be hosting more testing on Aug. 11.