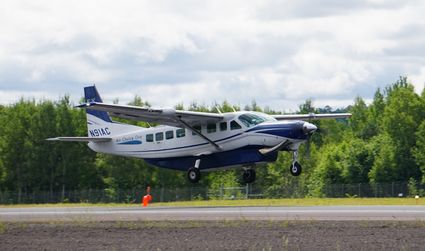 A Cessna Grand Caravan lands Monday morning, at Gogebic-Iron County Airport. The Air Choice One flight with passengers from Chicago was the first commercial flight to arrive since the airport closed for runway reconstruction on June 1.

The runway rehabilitation and runway lighting reconstruction project required the airport closure on June 1. The $5.19 million project was to be completed on July 15, but weather and scheduling issues delayed the project until July 18.

As contractors made minor repairs inside the terminal, the airport workers were staining windows and painting so that the strong odors would be gone by the time the building reopened, Harma said. Airport crews also painted the terminal parking lot lines after a contractor resurfaced the area.

"It's been a long six weeks," Harma said.

Commercial service started again on Monday, according to Shane Storz, CEO of Air Choice One airlines from the corporate office in St. Louis. The first flight flight back to Ironwood was from Chicago O'Hare International and landed at around 11:09 a.m. Monday, he said.

"We're back," Storz said of restoring daily flights to and from Minneapolis and Chicago.

Air Choice One, the Essential Air Service provider for commercial passengers, will hand over service to Boutique Air, Inc., the new EAS provider that will take over on Aug. 1.

"Our last flight out will be on Friday, July 31," Storz said. "We had six great years and I wish we could have stayed. But we're very thankful to have served the community and we want to say thanks for the opportunity."

Civil aviation started immediately after the runway was declared open Saturday evening, Harma said. The first private planes were taking off and landing shortly after 8 p.m.

The runway work involved milling the existing surface and applying a new blacktop runway, after edge and end lighting boxes, conduit and wire were placed. A final coat of paint and surface cutting will be accomplished during a second shutdown period from Aug. 13-20.

The runway project was possible with a Federal Aviation Administration discretionary grant.