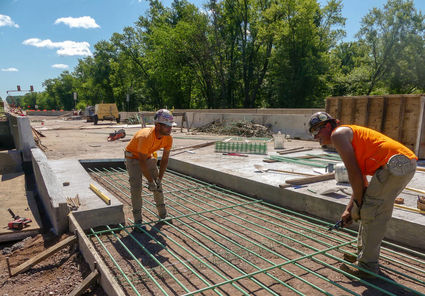 Dustin Evitts, left, and John Donati, of Hebert Construction Company of Iron River, tie rebar on the Presque Isle Bridge in Marenisco Friday. The U.S. 2 bridge is just east of the M-64 turn-off to Marenisco.

MARENISCO - Renewal of a U.S. 2 bridge over the Presque Isle River continues directly east of the M-64 turn-off to the unincorporated area of Marenisco.

The project funded by the Michigan Department of Transportation began on June 1, along with a concurrent road project on M-64, south of Marenisco's "downtown" region.

Hebert Construction Company, of Iron River, is in charge of the bridge project.

"The old one was all broken up," said John Donati, an Hebert employee, on Friday.

"The water was running the wrong way," added Donati, who explained that the bridge's center pier had deteriorated.

He said their aim is to "re-pitch" so that rain water can run off the bridge efficiently.

Donati and Dustin Evitts were in the process of tying rebar, which will reinforce the new cement to be laid.

The men were working on the highway's westbound lane while vehicles flowed on the eastbound lane with temporary traffic lights directing drivers, alternately, from east to west and from west to east.

According to Donati, they are nearly done with the westbound lane and then expect to start on the eastbound lane.

"Hopefully, it's only for a month and a half at the most," he said of the remaining work while joking about the hot, short season. MDOT projects Sept. 25 as the end date.

Hebert Construction is also building a new Blackjack Road bridge over the Black River in Bessemer Township, and is applying a new deck on another bridge on M-28, west of Bruce Crossing. Its employees also expect to work on a separate bridge project on M-64, south of Marenisco's downtown region.

Dan Weingarten, communications representative for MDOT, said his department also has been responsible for this year's double-chip seal resurfacing of M-64. That work is expected to add a couple years of wear for the state byway.

He said the U.S. 2 bridge project - which will include an epoxy surface treatment to enhance safety by increasing friction - and the M-64 project each cost about $600,000.

Within Gogebic and Ontonagon counties, MDOT has pledged this year to spend $5 million to chip-seal 52 miles of roads. Along with sections of M-64, those roads include U.S. 45, north of Bruce Crossing from the Baltimore River north to the M-26 junction, and M-28 from Bruce Crossing east to Calderwood Road.

Weingarten encourages anyone traveling on state roads to check Michigan.gov/drive for information on road projects.