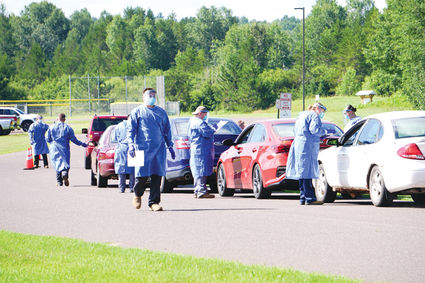 Members of Team 22, Detachment Delta of the Wisconsin Army National Guard's special COVID-19 testing support unit, talk with area residents in their cars who turned up for a COVID-19 testing event at Hurley K-12 School on Thursday. A second event will be held at the Wisconsin DNR Ranger Station in Mercer today.

The event was organized by Team 22, Detachment Delta of the Wisconsin Army National Guard's special COVID-19 testing support unit that went into effect under a federal order after Gov. Tony Evers declared a public health emergency on March 12, according to a spokesperson for the 24-member team that came to Hurley. The team headquarters is in Oshkosh and will continue working at least until the federal order expires sometime in August.

"We're just here to offer community-based COVID-19 (testing)," the spokesperson said. "It's free and open to the public. You don't need identification or anything like that.

Team 22 has participated in testing events all over the state, he said. These are the first conducted by the team in Iron County with Hurley and Mercer.

The team collects the specimens for the test kits that are sent to a state lab for analysis. Guard troops are also running a phone call center that will notify individuals of test results, positive or negative, in three to five days.

"There will be two attempts to contact the individuals by phone for either a positive or negative result," the spokesperson said.

There are 25 specimen-collection teams in all to help increase the state's COVID-19 testing capacity, according to a Wisconsin National Guard press release. The 600 citizen-soldiers and airmen run mobile testing sites at facilities and and drive-thru locations.

The Hurley Police Department controlled the vehicle traffic as drivers entered the school driveway. National Guard members asked the individuals in the vehicles a series of questions, before directing them over to the gymnasium parking lot where the testing was conducted in coned lanes.

"It's a community effort to do something like this," said Zona Wick, a previous Iron County health officer who was on the scene. "We are really appreciative to the Hurley School for opening up to us."

Wick was hired on to help out the county health staff during the pandemic. The current health officer Katie Hampston, and other staff were also on scene.

For the event to happen the county health department went to Stacy Ofstad, the county emergency management director, to request the assistance of the National Guard, Wick said. The Hurley Police Department was vital for traffic control and the Hurley School staff also supported the team with anything needed and set up a break area for the Guard members.

The reason for the widespread testing is in part due to the rapid increase in COVID-19 positive cases in Iron County in recent weeks, she said. After single-digit numbers from March through May the numbers have spiked with the summer season, she said.

"So it seems after the Fourth of July now we've seen an uptick in cases to where we are over 40 COVID-19 cases now," Wick said. "This uptick is the reason we've asked the Guard for some help to be able to screen our community more thoroughly and be able to look at our percentages.

People in the county are concerned that coronavirus is on the rise and so it's a way to do more testing, she said. Everybody over age 5 gets tested regardless of the questions, she said.

The health department initially ordered 400 tests for the Hurley event. Another 100 tests were ordered in anticipation of a large response, she said. There were 500 tests ordered for the Mercer event as well, she said.

The Iron County Health Department will follow up on any positive cases and conduct the contact tracing. Individuals tested in Iron County who live in neighboring Michigan or Wisconsin counties and have a positive result will have that information provided to their respective health departments to follow through with tracing and other support.

The Iron County Sheriff's Office will conduct traffic control for the Mercer testing today. The National Guard team will be at the state Department of Natural Resources' Mercer Ranger Station on U.S. 51 from 10 a.m. to 7 p.m.

As of Wednesday, the Iron County reported 41 confirmed cases of COVID-19 in the county, including 21 recovered, no one currently hospitalized, and one death.

According to the Western U.P. Health Department's latest COVID-19 numbers release on Tuesday, it has confirmed 81 cases of coronavirus in its five-county district, including 41 cases in Gogebic County, 32 in Houghton County, five in Baraga County, two in Keweenaw County and one in Ontonagon County.