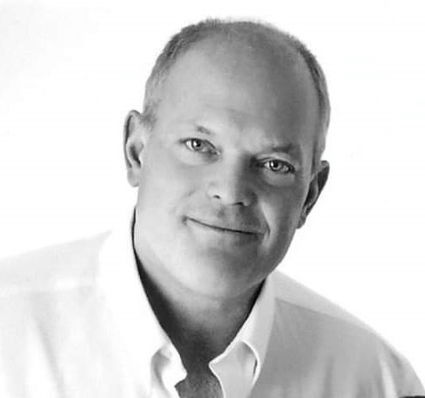 Ted was born in Kalamazoo to Paul and Jacqueline Strong on Oct. 18, 1959. The youngest of four children, he was raised on Austin Lake in Portage. From his earliest years Ted was a distinctively uncommon soul. As a young boy, Ted had a profound influence made upon him by his neighbor a few doors down, Bill Berger. Bill, a man well into his 70s, taught Ted a number of different working skills, but most importantly taught him that in order to be polite and respectful one is to ask questions and take a genuine interest in others. Those teachings and examples shaped Ted into the man people know today.

Ted attended Vicksburg High School and played basketball, baseball and football for the Bulldogs where he earned the fitting nickname "Extra," as in Extra Strong. During these years, Ted's family purchased a farm down the road from his childhood home. This egg farm owned by Hazel Eggert became an integral part of Ted's upbringing and another deeply influential ingredient to the shaping of his character. Ted shared in looking after Hazel, a red-headed, widowed woman who became an adoptive member of the family and found a special place deep within his heart.

Ted graduated from Vicksburg High School in 1978. He attended Michigan Technological University in Houghton where he graduated in 1980. This was the time he discovered the Upper Peninsula where he made his home north of Trout Creek in 1986. He always said he found the most unique, perfect piece of property that ever existed. Surrounded by federal forest land this property is where he built his log home.

In all the years from high school until settling in Trout Creek, Ted lived 10 full lives. Everything from working at the golf course, the cable television company, Hazel's egg farm, delivery truck routes between Detroit and Chicago, the hog farm, mowing hay with Barfy at the farm, where every single calf made it (always making a point to remind us he got paid $1 an hour and saved all the calves), to hauling black top with Rambo, and learning how to build log homes with Jerry. The list is endless. There simply isn't enough paper in the world to write it all down.

In 1996, Ted became the owner of Bond Falls Outpost, the gift shop at the Bond Falls waterfall. Bond Falls - the very same place Bill Berger, his childhood friend told Ted was his favorite fishing hole in all the world. There at Bond Falls Outpost in 1998 is where he met the gal who became his wife, Michelle. Ted and Michelle were married at Bond Falls on June 7, 2003. They went on to have six children.

In 2018, Ted purchased the Paulding General Store only a few miles down the road from Bond Falls Outpost. He then felt accomplished and complete. Of course, in true Ted fashion, he continued to truck, renovate his new store and work on all those ten thousand irons in the fire he had going all the time. There was always something to do, something to fix, or something to accomplish. Stopping to sit was not an option. He saw the potential in everything everywhere he went and in everything he saw. That brain of his was always formulating and brewing up something.

Ted was a professional conversationalist. He always welcomed a chat, which tended to turn into quite the colorful saga by conversation's end. Many of those conversations veered off into separate mini conversations, which took all his wild hand gestures and facial expressions into many detours and roundabouts. "What was I talking about? Oh, yeah ..." usually was what brought him back to his original conversation he began 45 minutes earlier.

Intense is the only word that remotely comes close in attempting to describe his drive. He was full throttle all the time at everything. His brain was continuously calculating, analyzing and searching for the most efficient, cost effective, highest output means for any task, action or job. Ted put the physical work of a dozen men into each and every job he completed. Sometimes that intensity may have seemed excessive or a bit too much to handle, but it always had good intentions - always. Ted was most certainly unique and sometimes was an acquired taste, but once he grew on you, he was there for you forever.

Ted was a logger and trucker where that intensity characteristic was clearly evident. Working for himself and, many times, by himself, he clocked an impossibly insane amount of hours, worked until the job was done and did it over again the next day, never seeming to run out of the energy it took to do so. This allowed him to build his home, property and entire world into the treasure it is today.

Ted was an eclectic person. He found happiness in fishing and hunting. He was an amazing cook whose grilled chicken was the best this side of the universe. He enjoyed growing and tending his garden every year and cultivating entire fields in order to ensure his children had giant pumpkins in the fall. His true joy was teaching his children everything he knew, showing them how to perform the skills he had and providing them with the potential to become great people. Everything he did in his world was for them.

Many loved him and his gift of gab, many were simply in awe of his unrelenting drive, and some may not have felt he was their sweet cup of tea, but overall, each and every person who ever came into Ted's life would all agree he was a worker, he strove for the best, and he was certainly willing to strike up a conversation.

A service celebrating Ted's life will be on Saturday, Aug. 1, at his home located at 7496 Strong Lane in Trout Creek. In true Ted style, services will be loggerman casual. It is requested of all who attend to please wear your everyday clothes and your cleanest work boots. Please wear what you did whenever you saw Ted. Services will be a spacious affair outside with seating provided or you have the choice to bring your own choice of chair. All guests may sit, stand, or do whatever is comfortable. Light refreshments and Ted food (small plates of hors d'oeuvres and snacks) will be served after the service.

Friends and the public are welcome to call at 5:30 p.m. with services starting at 6:30 p.m. The opportunity for anyone who may want to share any funny story, special memory, etc., about Ted will be welcomed. It is highly encouraged. Everyone has a story or a laugh. Aug. 1 is a day meant to celebrate Ted's life and to allow all the world to see, through and through, how much of a rare and extraordinary man he is.

Arrangements and assistance are by the Cane Funeral Home of Bruce Crossing.