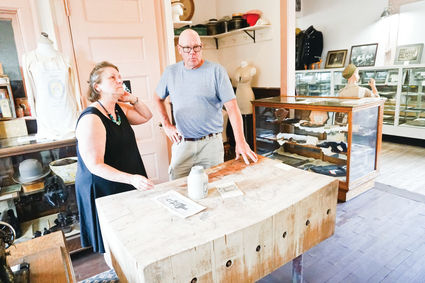 Ironwood Area Historical Society President Sandy Sharp, and Rod Smith, vice president and secretary, stand behind a century-old butcher block in the new women's exhibit of the museum at the Historic Ironwood Depot. The worn block was used by area grocer Tony Lopez to cut meat for customers.

Ironwood - The Ironwood Historical Society is celebrating its 50th anniversary and, although the pandemic shutdown has not provided much opportunity for fanfare, it has given the board and volunteers a chance to revitalize the museum and add new exhibits.

"Yes, unfortunately the Depot Museum is closed, but our volunteer staff have been very busy behind the scenes," said Sandy Sharp, president of the historical society. "We have been paying close attention to COVID-19, and our volunteers have been scheduled at varying times to complete many projects or continue to work on other projects."

This is normally a time of year when people return for class reunions, graduations and family reunions, she said. But, with most of the historical society members and volunteers over age 50, it would be difficult to stay with people who are more at risk for infection, she said.

As the only woman serving on the historical society board Sharp said she feels a sense of responsibility to ensure the legacy and contributions of Ironwood's women are celebrated along with the largely male exhibits on the mines, logging, railroads and other history.

"I have my own mission," Sharp said. "The women stayed home and made the meals and did the laundry and the cleaning and that was their life. But in order to accomplish that it took things to do that."

Sharp created a women's exhibit room to showcase a collection of items commonly associated with women over the decades. There are items already in place and a full exhibit is expected to be ready by winter.

"I know there are a lot of women out there who would love to see something like this," Sharp said. "We will put what we have out there and hopefully it will expand over time."

Items already in place include the wooden butcher block that was used in a former Ironwood grocery store owned by Tony Lopez. The block is curved on the top from years of use by butchers who chopped and wrapped the meat right in front of the customers.

A cookbook exhibit will showcase the tapestry of ethnic groups that comprised Ironwood's mining years. Cookbooks also highlight what women were making with recipes written sometimes before electric stoves or refrigerators.

"There are a lot of churches and they all published cookbooks," Sharp said. "I am asking people who have these old cookbooks and don't want them anymore to donate them to the museum."

Sharp wants to fill display cases with items and exhibit photos of neighborhood grocery stores and the other downtown stores where they shopped.

"Where the DAP (Downtown Art Place) is now downtown, there was a beautiful clothing store," she said.

Other relics that help tell the story of the women of Ironwood are sitting in attics, basements and garages, she said. Many museum donations come from families who clean out these homes after a parent or grandparent dies.

"This is my hometown and its history is important to me," Sharp said.

Ideas for other exhibits include a "then and now" book or exhibit to show photos of various Ironwood locations and buildings as they looked years ago and today.

"Growing up here I drive by some of these neighborhoods and you can still kind of tell where the old store was that is now a home," Sharp said.

The historical society formed in 1970 and was located at a building on McLeod Avenue from October 1971 until moving to the historic depot in 1982, according to Mark Aho, board member and archivist.

Aho is in charge of receiving items of interest for Ironwood from people who want to donate to the museum. He is also going through the archives to gather rare images and information to use in the 2021 Historical Ironwood Calendar.

"That was a good fundraiser for us," Sharp said of the first annual calendar in 2020. "The funds will go toward a new roof."

Volunteers have been cleaning and sanitizing the entire museum inside the Historic Ironwood Depot. There was dusting, mopping and getting rid of cobwebs. Even the windows were washed inside and out.

The display cases are being changed out in the east room with some new items being added. Display cases were angled to open up the space in the main room.

"This room was a waiting room for the trains and we opened it back up again to get that feel again," Sharp said.

Sharp and Rod Smith, vice president and secretary, said they downsized the mining exhibit with a "less is more" approach at the suggestion of the Historical Society of Michigan. It's the trend to showcase fewer items and to add information to explain what is there to visitors, Smith said. People stop and take in what is there without getting lost in clutter.

"We followed their advice and it worked," Smith said. "It is so much more open now."

Smith has updated his Civilian Conservation Corps exhibit. He has also filled a display case with various items he found during his 36 years of metal detecting in the area.

Smith's display showcases the lives of Ironwood residents with artifacts that were frozen in time. He "rescued" them from condemned buildings and sweeps of his electronic equipment over grounds that were once busy with activity.

It might be a pharmacy receipt written in Polish, a Cracker Jack box, Ironwood Brewing bottles, antique advertising.

"Every old house has a story to tell," Smith said. "They're definitely time capsules."

Smith also puts together "The Whistle," the quarterly newsletter of the historical society.

Moving forward the board is working to attract more members and volunteers. The average age of the current group is in the '50s and '60s, she said.

The historical society also follows through with requests from people working on genealogy. The archives include databases, obituaries, newspaper microfiche and city directories that they use to research the requests.

"That is kind of a behind the scenes service that we offer," Sharp said.