The Pines reopens a year after fire 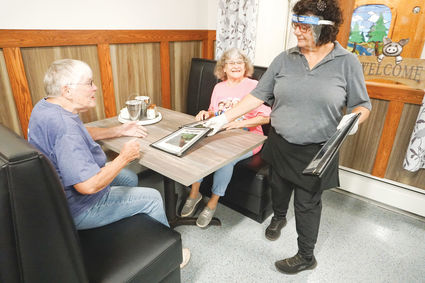 Debra Alexandroni, a server at The Pines Cafe, hands menus to Yvonne Pumala, left, and Sharon Colassaco, shortly after the restaurant reopened Monday morning, almost a year to the day after an apartment fire on the second floor gutted the restaurant on Aug. 11, 2019.

Ironwood - It is a year to the day since a fire destroyed The Pines Cafe in downtown Ironwood, and owners Susan Craumann and Janice Miskovich re-opened the renovated restaurant a day earlier on Monday.

"It's been a very long year," Craumann said. "Reconstructing the place was a long process."

It was the pride in their business that helped them to navigate the "devastating path" resulting from the fire, she said. They wish it never happened but going forward is all they could do.

"It's like starting 20 years again," Craumann said. "It's hard to explain to people when you've lost something that we did for 20 years and then a year later start again."

The owners never thought there would be a day when their business would be taken down to nothing, gone. There is excitement to see it rebuilt, but there are jitters, too.

"Of course you have nerves," Craumann said. "It's very hard to explain how you feel."

The first customer through the door at 7 a.m. Monday was Jane Ramme, who said she and her sister were regulars and would come here all the time. She said it felt "just great" to walk through the door on Monday.

"The food is wonderful," Ramme said. "It's nice to have eggs Benedict back."

A group of three men having breakfast together said The Pines was among their regular stops.

"They did a good job of remodeling," said Bert Saari, breakfast companion.

His companion, Chuck Lewis, said he missed the food.

Pumala added she's been waiting a long time for the restaurant to reopen. She was excited to walk in on Monday.

Craumann and Miskovich said the restaurant had just undergone a complete renovation just prior to the fire. The two could have walked away but were committed to rebuilding.

"When you pour 20 years of your life into building a business, a place - no, you just don't walk away from that," Craumann said.

It was soon apparent that the work was going to be more extensive than just the smoke and water damage from the upstairs apartment arson fire that caused the restaurant ceiling to collapse onto the dining room below, she said. The restaurant had closed just a couple hours before the blaze that area fire departments responded and kept contained to the building at 120 S. Suffolk Street with no injuries resulting.

Hykesha Deshay Martin, a 24-year-old woman who was married to the tenant above the restaurant, was convicted of first-degree arson in a plea deal in Gogebic County Circuit Court and sentenced to 11-50 years in prison in December 2019. She had reportedly poured lighter fluid on her husband's bed and started the blaze, according to a previous Daily Globe story.

"Most people don't realize, nor did we, the damage that was done," Craumann said. "It was deceiving how much damage was actually caused."

The two credited the general contractor, Nasi Construction, along with the plumbing, electrical and other subcontractors with helping get through the mounting construction issues. Even the soft drink distributor helped out with promoting the reopening along with their products.

"We have some very good people who worked with us to get us up and running," Craumann said. "They were phenomenal and very professional."

Craumann and Miskovich said the community was also a great source of support over the past year. People were constantly reminding them how much they missed the restaurant and wanted to know when they would reopen.

"We had unbelievable support from this community," Craumann said.

There were delays, some technical, some with the insurance, she said. Opening from scratch also means a lot of last minute things that need to be in place, such as the prep work after and all the food and produce is in place, she said.

The look and feel of the restaurant is a little different inside, she said. But the menu and service is the same.

"We did not change any of that," Craumann said.

Now the goal is to let the community know that they "are back and better than ever," she said. The menu and the quality hasn't changed and maybe it's even better, he said.

The owners said they "love the area and love what they do." They are happy to finally open their doors again and are grateful that most of their employees are able to return.

"It's been a tough year for the employees," Craumann said. "We lost three and we've been able to obtain some good people."

Debra Alexandroni, a returning server, said she is happy to be back at work after a year. She had gotten pretty attached to her dogs during that time.

"I just hate leaving my dogs," she said. "They just look at me like, 'Can I spend the day outside with you?'"

Opening during the coronavirus pandemic with the changing regulations is also something that required some preparation, Craumann said. The restaurant layout is marked and servers are wearing face shields and patrons are asked to mask before they are seated.