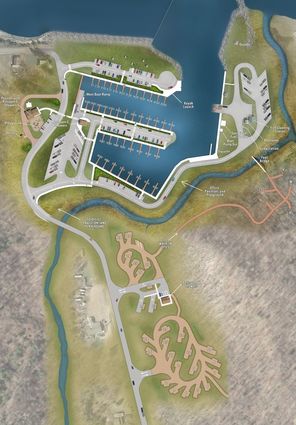 THIS MAP of Saxon Harbor, provided by the Iron County Forestry Department, depicts the layout of the new marina and campground, which have been rebuilt following the harbor's destruction in the July 2016 storm. The campground opens to campers today for the first time since the storm. It will close again Sunday for some final work to be completed before reopening for the season Thursday.

SAXON, Wis. - For the first time since the former location was flooded in the July 2016 storm, people will be able to camp at Saxon Harbor's campground today.

Although the campground is only scheduled to open for the weekend before closing to allow for some final work to be done, the plan is to reopen for the season Thursday.

"It will be nice to see a full facility again," said Eric Peterson, Iron County's forestry and parks administrator.

The campground opens today at 4 p.m., on a first-come, first-served basis for the weekend only, according to a post on the Saxon Harbor Facebook page, an...