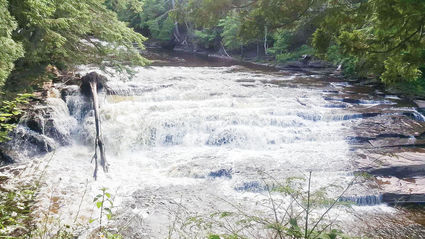 Ryan Kohnhorst, 39, of Merrill, Wisconsin died after falling over the Manido Falls in Wakefield Township on Friday night. Signs near the falls, seen here earlier this year, warn of the dangers waterfalls present.

Wakefield TOWNSHIP - A Wisconsin man died Friday night after going over a waterfall on the Presque Isle River in the Porcupine Mountains Wilderness State Park in northern Gogebic County.

Michigan State Police troopers were dispatched at 8:30 p.m. to the Presque Isle Campground, off of County Road 519, after a 911 caller reported seeing someone go over the falls, according to a MSP news release.

The man - later identified as Ryan Kohnhorst, 39, of Merill, Wisconsin - was walking with friends near the waterfall when he fell into the Presque Isle River. Gogebic County Sheriff's Department staff said Kohnhorst went over Manido Falls.

The friends called 911 after they were unable to locate him, according to the release.

Rescue personnel taking part in the search effort found Kohnhortst unresponsive in the river, according to the release. He was later pronounced dead.

This is the second death related to falling over a waterfall in Gogebic County this year. In July, Stephanie Narvaez, 22, of Watertown, Wisconsin died after falling over Rainbow Falls on the Black River.