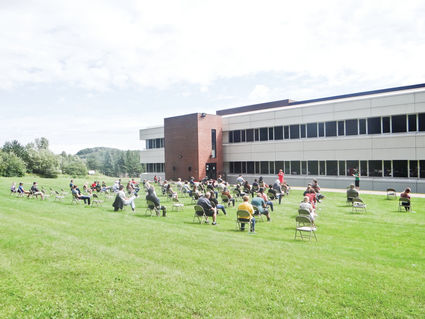 NEW STUDENTS at Gogebic Community College attend an orientation session held outside the Rutger Erickson academic building on campus. Numerous safety measures have been put into place to protect both students and staff from the potential risk and spread of COVID-19, such as mandated face coverings, directional stairways and more spacing between students in the classrooms.

Ironwood - The rituals of campus life are slowly beginning to resume at Gogebic Community College, as students began moving into the dorms Monday and the first orientation events were held Wednesday, with more planned for today. However, things are undoubtedly different as the college takes steps to protect students during the COVID-19 pandemic.

"We are excited to welcome students to GCC this fall, ... the safety of our GCC community continues to be our No. 1 priority," said George McNulty, GCC president.

The college has a number of safety precautions in place to help prevent the spread and risk of contracting COVID-19, a college spokesperson said in a news release.

Among these are the requirement that all members of the campus community - including students, faculty and staff - complete a daily health screening prior to traveling to campus, or leaving the Campus Suites dorms.

Everyone on campus is required to wear a mask in all public spaces such as classrooms, common areas and hallways. During orientation, students are being given one GCC-themed reusable and washable mask. These masks are also available to students at the campus bookstore. Disposable masks are also available throughout the campus. Those who are not able to wear a mask for medical reasons must contact accessibility services.

Classrooms at GCC have been reconfigured to allow more space between the students so that they "can feel safe in a classroom setting," the spokesperson said. Students will be required to clean their desk surface before and after use. The college will be utilizing attendance records and seating charts for potential contact tracing. There are also signs throughout campus to remind people to wash their hands, use sanitizer and maintain social distancing. Stairways have been designated for either up or down travel, so as to "avoid cross-contact with others." The college has also increased cleaning practices and time allotted each day.

The dorms opened to students on Monday, but because of social distancing practices, students were required to schedule an appointment to move-in, according to Aaron Froelich, Campus Suites manager.

"Everyone is kind of signed up and limited to certain time slots to move in as we are trying to be socially distant," said Froelich. The college is also limiting the amount of people that can help a student move in to the dorm to two people and requiring they be "close" family.

Ten students signed up to move into the dormitory on opening day, six more moved in on Tuesday, and 20 were scheduled for Wednesday - which is also an orientation day for new students, he said. The remainder of students will have scattered move-in times today and Friday.

There are 62 GCC students who are signed up to live in the dorm this year, as compared to just under 70 last year, Froelich said. Despite the small decline, that is still an increase from fall 2018 where there were only 52 students living in the dormitory.

"As far as residents in the dorm, it is not too different (from prior years). We still have a lot of classes that are in-person such as skilled trades and cosmetology classes," Froelich said.

However, because of the pandemic, only one guest will be allowed in each student's dorm room at a given time during the school year and all guests must be GCC students.

Any guest will have to fill out a general health screening and have their temperature taken in order to enter the dormitory. No overnight guests will be allowed.

Carol Anderson, who was dropping her son, Tommy Thompson, Jr., off for his first year of college said that she was glad her son was going to college, but was really nervous about this year because of the pandemic.

"I have mixed feelings about it. I'm happy he's going to college. It's just a really bad time," she said.

She said part of her concern was with the layout of the dorms, where two rooms share a bathroom - meaning there are three people, rather a single roommate, who could potentially spread the virus.

"I'm not scared (for myself), I'm more worried about my family," Thompson said. "Like if one of my roommates got the COVID or anything, then I go over and see my family and pass it on to them."

Anderson said that many of their family members are considered "high-risk," so she is very concerned about the possibility of it being spread to them.

Thompson said that he doesn't feel people take the pandemic seriously and that many people won't change the way they do things, despite the regulations and safety protocols the college is implementing. "You gotta just go with things as they are," Thompson said.

The college is also offering distance delivery methods for students who don't feel comfortable being on campus.

"Our fall class schedule was updated to reflect which classes will be in the classroom, online, and on Zoom," said David Darrow, vice president of Academic Services. "It is our goal to assist students to continue their education in whatever setting they are most comfortable with."