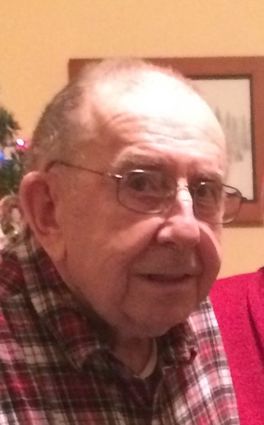 DULUTH, Minn. - Raymond "Ray" Kuula, 87, of Ironwood, passed away Aug. 16, 2020 at Essentia St. Mary's Duluth from respiratory failure due to complications of Parkinson's, of which Ray used his Sisu to deal with over the last several years.

Ray was born June 17, 1933 at Grandview Hospital in Ironwood to Verner and Mildred (Hautala) Kuula. He was raised with his brothers in Oma Township near the Gile Flowage.

Ray met the love of his life, Kay, when they both worked for S.S. Kresge store in downtown Ironwood. They celebrated their 65th Wedding Anniversary on July 9.

He worked for PJ Nickel and Nasi Construction before venturing out and starting his own businesses. He worked on many houses in the area as Town and Country Builders. He delivered LP Gas to many and always had time for a cup of coffee to anyone that needed some company. He sold windows and was an overall "Jack of All Trades" and could fix anything. He enjoyed attending the Bessemer Professional Men's Club at the VFW with his son, Ed.

He was later known as the "Tractor Man" for his love of restoring old tractors. He proudly was a member of a crew of Finnish carpenters that built the sauna at the original St. Louis Cardinals baseball stadium and was a featured guest on Finland Calling interviewed by Carl Pellonpaa for his effort in moving and placing the 'Maki Sauna' on the grounds at Little Finland.

Ray and Kay traveled extensively which included visiting all 50 States and 120+ trips to the Copper Country for blueberry and apple picking and for putting flowers on his ancestor's graves. They attended many FinnFests over the years often bringing along their children and grandchildren. Ray and Kay enjoyed an Alaskan cruise to celebrate their 50th Wedding Anniversary and Ray fulfilled his lifelong dream of visiting Finland in 2010 where he impressed the Helsinki locals with his Finnish language skills.

He proudly graduated from Hurley High School in 1951. Over the years he loved attending Hurley games with his good friend Kenny Hanala. And was thrilled to watch his youngest grandchild, Tianne, play for his beloved Hurley Midgets.

We wish to thank the staff at Westgate for the loving care they gave to Ray since December and the Essentia St. Mary's staff for their outstanding compassion in the final days.

Graveside services will be at Riverside Cemetery on Monday, Aug. 24, at 1 p.m.

The family has chosen McKevitt-Patrick Funeral Home in Ironwood to honor Ray's legacy of life. You can leave a condolence or a tribute at mckevittpatrickfuneral.com

In lieu of flowers, please consider donations in the memory of Ray to Little Finland or the Parkinson's Foundation.