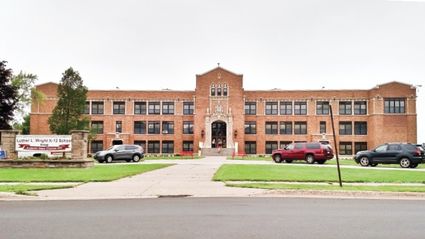 THE LUTHER L. Wright K-12 School, seen here Monday, was expected to be full of students for the first day of classes today. However, the district announced Friday the start of the school year was being pushed back to Sept. 8 to allow for additional time for upgrades to the building's elevator to be completed.

Ironwood - The Luther L. Wright K-12 School was expected to be filled with students today for the first day of the 2020-21 school year, however, the district's board of education voted in an emergency meeting Friday to postpone the start of the school year until Sept. 8.

"It is with a heavy heart that I inform you of the delay in the start of this school year. ... The reason for this delay is that our elevator, which is being upgraded, will not be usable until that time," Ironwood Superintendent Travis Powell said in a video statement posted on social media and the district website. "Our Preparedness and Response Plan relies heavily on our elevator to ensure that food is delivered to classrooms on the second and third floor. Without it, we will be unable to deliver meals to classrooms on the upper floors, and therefore severely limited in our ability to ensure social distancing for students during meal times."

Ironwood students in dual enrollment, early college, career and technical education programs that are having classes prior to the district's new Sept. 8 start date are required to attend those classes, according to a post on the district's Facebook page.

Powell told the Daily Globe the upgrades to the elevator were needed because, while the mechanics behind the elevator were sound, some of the electronic components were obsolete and finding replacement parts could be near impossible if they broke.

"It works, because it's not a complicated operation. ... However, the last time it was needed to be upgraded or adjusted, we were informed we have the very last (part) in the country that operates that interface," Powell said.

Powell explained there have been several issues with the project. One of the factors responsible for the delay of the school year is that there's only one elevator inspector for the Upper Peninsula, and while there was a possibility the inspector would be free prior to the start of the school year, Powell said the district didn't receive confirmation of the Sept. 1 inspection until Thursday.

He said district staff then spent the remainder of Thursday and Friday attempting to find a way to start the school year without the use of the elevator before calling the emergency board meeting.

The elevator upgrades were included in the bond voters passed in August 2018.

The news that the elevator wouldn't be ready for the start of the school year is the last obstacle in the upgrade project, which Powell called a "frustrating process."

Initially the work had been completed last summer, according to Powell, but the trade war with China meant some of the materials weren't available. This was followed by the school building's closure due to the coronavirus pandemic.

The price of the project has also ballooned, as Otis Elevator Company's bid of $106,000 came in at roughly double the initial estimate of $55,000 used when seeking the bond.

Although the cost was more than the district expected, Powell said the lack of competition and only one submitted bid meant there wasn't an alternative.

"We're kind of at their whim," Powell said.

The project's price tag increased again when the district had to spend an additional $36,000 for ancillary work - such as connecting the elevator to the smoke alarm and sprinkler system - that wasn't included in Otis' bid.

"The whole project was already double the expense we planned on, and now we added another $36,000," Powell said.

"Here we are - way over budget, way over timeline," he said.

In his Facebook post noting the delay, Powell promised to continue to communicate information with parents as it became available.