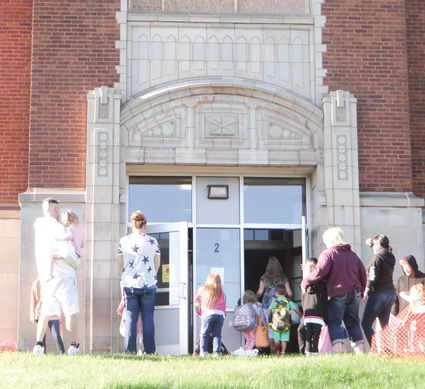 Kindergartners and their parent stand outside Bessemer's Washington Elementary on Tuesday, as they prepare to start their first day of school. In past, parents have been able to escort their student into the classroom; however, because COVID-19, parents are not allowed inside the building and parents were forced to say their goodbyes outside.

Bessemer - Students at Bessemer Area Schools returned to much different campus than they had left, with the school making multiple modifications and improvements to the buildings both structural and cosmetic, and new technology available at A.D. Johnston Junior-Senior High.

Students at Washington Elementary walked into a school Tuesday that has far fewer windows, at least temporarily. All of the old windows have been taking down and replaced with plywood, in preparation for the school's new windows which are scheduled to arrive in late September to mid-October according to Superintendent Dan Niemi.

The windows will help the school to better regulate the temperature of the building then the old glass bock windows, he said. In the meantime, small temporary windows have been installed, at no charge, in the middle of the classrooms, so that students will be able to see out.

A new ramp on the east side of ADJ was built. The concrete was poured Monday and the handrails will be installed soon, Niemi said.

The school is also correcting a water drainage problem near the foundation on the northeast corner of the building.

The gymnasium at ADJ, which Niemi referred to as "our centerpiece" has undergone some major renovations over the last three or four years. Dick Matrella completed the repainting of the gym in blue and gold on Sunday.

"It's kind of the hub of what we do here," Niemi said of the gym.

High tech lockers to store and charge new Chromebooks were recently installed into classrooms. The computers will be assigned to students.

Students are assigned a computer locker based on the location of the last class they have each day. The computer also comes with a high quality case, said Niemi. "Inside of it is an aluminum metal plate on both sides. So you could throw it that window and it wouldn't bust," Niemi told the Daily Globe.