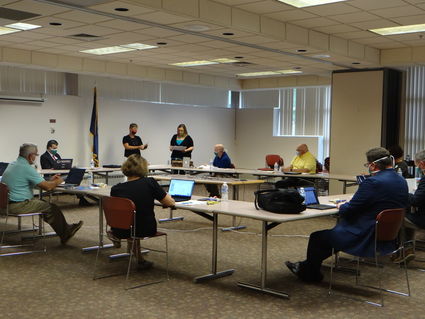 IRONWOOD - The Gogebic Community College board worked to welcome the new school year with the hiring of four new staff members Tuesday, filling the positions of registrar, career counselor, Nordic ski coach and a networking specialist.

The board formerly approved the hiring of Jacqueline Franzoi as career counselor, although she had already started her position.

"We're really excited and we're thrilled to have her here," vice president of student services Jeanne Graham told the board as she introduced Franzoi.

Franzoi, a Hurley native, told the board that it has always been her goal to be back home, and that she is very excited to be working for GCC. She graduated from Hurley High School in 2005 and earned a bachelor's degree in social work from University of Wisconsin-Oshkosh and then a master's degree in school counseling from UW-Stout. She most recently was a counselor for the Prentice (Wis.) School.

Kristin Kenny, of Victoria, Texas, was hired to fill the registrar position. Kenny has a bachelor's degree in education from Baldwin Wallace College in Iowa, and was previously the assistant registrar at the University of Houston-Victoria, as well as an admissions analyst there. Kenny will start at GCC the week of Sept. 7.

Will Andresen will return to coach the newly reformed Nordic ski team. He coached the Samsons ski team for four years and the cross-country running team for five years. He was a four-year letter winner at Northern Michigan University from 1979-1983. "I am excited that the college is choosing to bring back the ski team and will do my best to make this a successful team that the school can be proud of," he wrote in a letter to the college.

The board also accepted a letter of resignation from the director of athletics and the Lindquist Student Service Center Michael Boerman. He is moving to teach history in Grand Rapids.

"We owe a great deal of thanks to his efforts to solidify our athletic programs and showcase the talents of our student athletes at our institution," a GCC official said in a press release.

Boerman helped to create a new GCC athletics website - gogebicsampsons.com. Boerman offered a virtual tutorial of the site to board members during Tuesday's meeting, and Aaron Froelich, the co-creator of the site, demonstrated in person.

The board also approved the strategic plan which was presented to them by Miranda Heglund and Beth Steiger, who co-chair the Strategic Agenda Committee. The plan includes goals, objectives and strategies which tie to the Higher Learning Commission's criterion core components. Steiger and Heglund also discussed the use of a logic model and how it ties to resources, activities and outcomes of the plan.

The board also approved the adjunct faculty list for the fall 2020 semester.

During an executive session, the board heard an update on the Porcupine Mountains Wilderness State Park which the college has a rolling contract with to run the ski hill there through the college's ski area management program.

After executive session, the board approved a tentative agreement for a six-month extension of the college's contract with the Michigan Association of Higher Education.