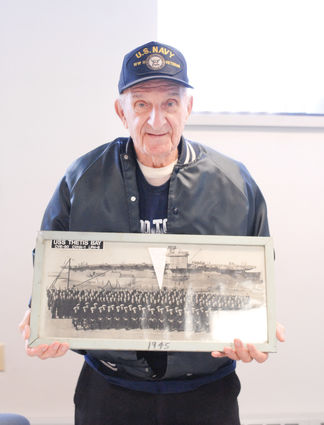 TOM DECARLO, of Ironwood, holds a picture of the USS Thetis Bay and part of its crew, above. Born and raised in Hurley, DeCarlo served aboard the ship during World War II and witnessed history from it when it was nearby the USS Missouri in Toyko Bay during the Japanese surrender ceremony that formally ended the war.

DeCarlo served aboard the USS Thetis Bay, which was anchored close to the USS Missouri where the surrender ceremony was held.

DeCarlo recalls leaving the ship's engine room on the way to eat and seeing the Missouri in Toyko Bay.

"I could have thrown a football on it," he said.

Arriving in Toyko Bay two days before the ceremony, De...