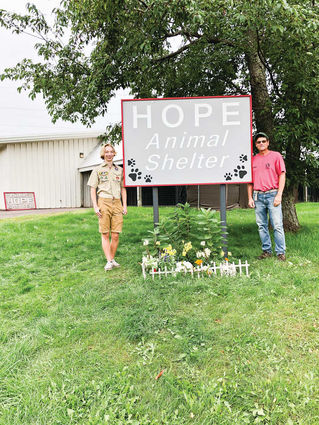 Sabastian Yaeger, an Eagle Scout candidate and Randy Kirchhoff, director of HOPE Animal Shelter, stand next to the entrance sign Yaeger built for the shelter, fulfilling a requirement to become an Eagle Scout.

In order to become an Eagle Scout, the highest rank in the Boy Scouts, Yaeger had to develop and carry out a service project to benefit his community. The sign is the completion of that project.

"I chose to help HOPE with their sign because my family has two dogs we've adopted from them. I wanted to show how much I appreciate them helping to take care of animals without homes and placing them with good ones," Yaeger said.

Yaeger, 18, started talking to Randy Kirchhoff, director of HOPE, last summer about potential ways that he could help the shelter. After Kirchhoff said the shelter could use a new sign as the old one was 26 years-old and in rough shape, Yaeger submitted a proposal to the Boy Scouts for approval and then took action. The whole process took a little over a year.

"My original plan was for it to be done early in the year, but due to COVID, the school closed and I wasn't able to use the machinery," said Yaeger, who was building the sign at the Hurley K-12 School's Northwoods Manufacturing wood shop.

He had to get special permission from the school in July to gain access to the wood shop. Yaeger received help with the carving and design from his shop teacher Roger Peterson, and then worked for one hour each day at the wood shop, over the course of two months to complete the project.

Yaeger said his parents helped him throughout the project, and near the end, he received some help from fellow scouts and friends.

Yaeger was able to complete and place the sign at the shelter just before he left to study clinical lab science at the University of Wisconsin-Stevens Point. His deadline to complete further requirements to become an Eagle Scout is Oct. 9. He said he would like to continue scouting after becoming an Eagle Scout, by taking on a leadership role in the future.