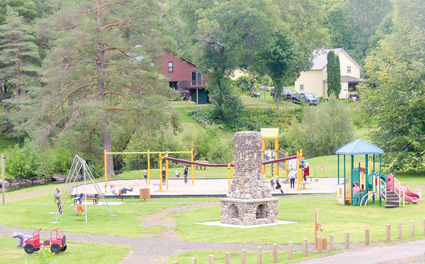 A GROUP of children and adults enjoy the many options at Ramsay Memorial Park on Sunday afternoon. People traveled by ATV, motorcycle, bicycle and car - as well as by foot - to use the newly remodeled park on the long holiday weekend. The stone fireplace was built by the late William "Lefty" Giackino, whose daughter and granddaughter were among weekend visitors.

Ramsay - Labor Day weekend is traditionally a time when family and friends gather for games, barbecues and an opportunity to enjoy each other's company before the winter season creeps in.

Sunday afternoon was no exception as people came from near and far to indulge in the many new park amenities at Ramsay Memorial Park, made possible by a $400,000 renovation.

Also ready just in time as an additional route to get there was the recently finished Iron Belle Trail extension from Bessemer to Ramsay.

As a result, park visitors arrived by bicycle, ATV, motorcycle, car and also on foot with dogs.

Among them were about two dozen family members - mostly from the Hurley area - associated with Heidi Hoeft.

Kathleen Walesewicz, who was with her son, Nick, 12, said most of the gang had traveled by bicycle on the Iron Belle Trail on a route that would result in being up to 30 miles round trip from their locations in Iron County. A cart was used to haul the youngest kids.

She and other family members said it was the first time they had used the new trail between Bessemer and Hurley, and they were impressed, referring to it as "gorgeous."

Although it was a gray day, they said the mild weather was "perfect" for a bike ride.

"We had a pedal come off, and we had to go to O'Reilly's," said Walesewicz, but otherwise everything had gone smoothly.

Members of the gang apparently were planning a later reward, as they teased the kids to say "ice cream" while smiling for group photos next to the Black River.

Walesewicz said the family has a tradition of doing "long bike rides," combined with park play, every Labor Day or whenever out-of-town family members can manage to travel to this region.

Traveling solo on the trail Sunday was William Van Haren of Verona, Wis. He said he'd come from Ironwood, where he also owns a home, and expected to log about 20 miles by the time he returned there.

Van Haren, who calls himself a "snowbird," raved over the entire trail but emphasized the stretch from Bessemer to Ramsay is "beautiful."

He added, "Congratulations to the state of Michigan. This is really nicely laid out - a great asset."

While in Ramsay, Van Haren wanted to visit the park and the Keystone Bridge.

Overlooking the bridge from the Iron Belle ATV trail were Janet Oravecz of Rhinelander, Wis., and her daughter, Darlene Collins of the Milwaukee area.

"I was raised in Ramsay," said Oravecz, while her daughter added that she had been born in Wakefield.

"It's been maybe 10 years since I've been here," said Collins. "I've been enjoying seeing all the old places."

Her mom added of the park, "When we were kids, we swam here every day."

Oravecz said they had traveled here to retrieve flowers from family plots in the Bessemer and Ironwood cemeteries, but also took time for a stroll down memory lane.

Oravecz's father, the late William "Lefty" Giackino, had been a janitor and bus driver for the former Ramsay School, and he also had built the large stone fireplace in the park.

Also visiting the park were vacationers Brian and Barb Thayer of Onaway.

According to his account, they were "seeing waterfalls, taking pictures and leaving footprints."