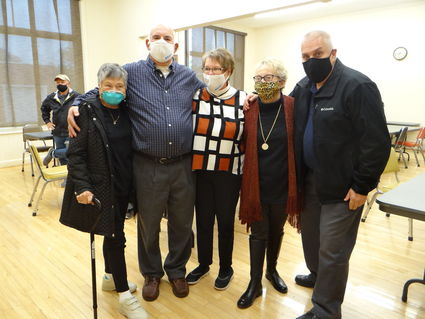 ROCKLAND - The Michigan State Police awarded a Rockland man with the "Distinguished Citizen Award," on Wednesday evening - the highest honor it can give to a civilian. The award was presented to Bruce Racine for rescuing his neighbor, Caryl Miilu, 85, from a house fire on June 3.

"It is an honor and a privilege to recognize your high degree of civil duty that was displayed while assisting in the lifesaving of another," said Eighth District Commander Captain John E. Halpin in a letter that accompanied Racine's award. "I salute you for your outstanding commitment to public safety."

Racine received the award at a brief but crowded ceremony at the Rockland Township Hall Wednesday evening.

The night of the fire, Racine was awakened when his neighbor, Silvia Lehto, 80, pounded on his door, at 4:20 a.m., after she had escaped from her burning house. She informed him of the fire and said she was unable to get her sister, Miilu, out of the house.

Racine told his wife, Pat, to call 911 and immediately ran to the house to get Miilu, in "his shorts and bare feet," according to his wife.

According to the report, when he got to the house he went to the front door and saw that the house was full of smoke and he couldn't see anything. He yelled for Miilu, but got no response, the report continued. So, he then went around to the north side of the house and broke Miilu's bedroom window and was able to see fire in the northwest corner of her room.

Through the broken window he told Miilu to crawl to the front south door. He then went to that door, opened it and continued to call for Miilu, until she reached the door. From there he then carried her to safety, according to the report.

"The living room was just solid smoke. I got to the door and he is on the other side of the (south) door saying 'get out of there' and I said 'I'm trying,'" Miilu said of the incident, adding Racine "must have pushed (the door open) at literally my last breath, and I think I literally fell out of it. He kept me from banging my head on the cement."

"Had it not been for the quick and unselfish actions taken by Mr. Racine during the early morning hours of June 3, 2020, Ms. Miilu would have certainly perished in this house fire. Mr. Racine's heroic actions to save Ms. Miilu's life are to be commended," said MSP Det./1st Lt. Robert Pernaski in his letter recommending Racine for the award.

Pernaski, who recently retired from the MSP special investigation section, Eighth District headquarters in Marquette, was also in attendance to thank Racine for his actions that night. The township hall was filled with approximately 50 people, including both Miilu and Lehto, whose presence at the event Pernaski referred to as "the cherry on the cake."

The Distinguished Citizen Award is not handed out often. Pernaski and Horn recalled only three times that either of them had been involved in such an award over the last 20 years. "We don't hand these out very often, but we do hand them out when merit calls for it and by all means this calls for it," Horn said.

"A Distinguished Citizen Award, it's a pretty big deal actually," Pernaski said. "We can't give a lifesaving award to a non-department member, so this is like the highest it goes for a civilian."

Pernaski nominated Racine for the award, sending a summary of the incident to the director of the MSP, Col. Joseph Gasper, in Lansing, who determined that he was indeed worthy of the honor for his actions that night.

"I thought this could not go by without mention, without due recognition," Pernaski said. "Bruce, my hat's off to you, and I think your community echos the same message. We're darn proud of you. We're so happy that you guys are good and healthy. It isn't everywhere in the state, Bruce, that people go to get help in the middle of the night, 4:20 in the morning and somebody is as eager and is willing to run across the street and do what you did. I mean it doesn't happen everywhere. Obviously, it happened in Rockland."

"We knew where we could get help," Miilu said.

"Good neighbors and good friends, they help each other out," Racine said.

Jerry Hoffman, with the Rockland Volunteer Fire Department, said that the "luckiest thing we ever heard" was that everyone was out of the house. He said that they put over 200,000 gallons of water on the house, but were unable to save it, but they were safe.