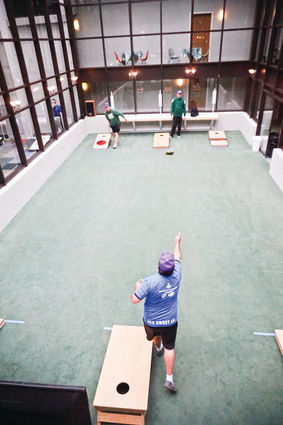 Joe Rimkus, of Ironwood, tosses a bag during pregame warmups for the first ever cornhole tournament at Whitecap Mountains Ski Resort on Saturday, as Bob Heil, left, of Bessemer, and Joel Karnick, of Park Falls, Wisconsin, warm up on the opposite end.

UPSON, Wis. - With most cornhole leagues inactive during the coronavirus pandemic, the special events attract many players including the first ever tournament sponsored by Whitecap Mountains Ski Resort on Saturday.

The tournament is one more way to draw people to the resort in the off-season, according to David Dziuban, resort manager. The golf course had an especially busy summer and in addition to weddings and family events, the cornhole tournament is a way to spend a day playing and then take a self-guided tour of the resort.

"We held off on announcing events to see what was going to happen," Dziuban said of the resort which was able to reopen along with the golf course after the Wisconsin Supreme Court's ruling on executive shutdown orders in June. "The inaugural cornhole tournament was going to be held outside but we were able to bring it inside with the rain."

Lee and Bonnie Duchac, of Wisconsin Rapids, have been coming to Whitecap for years to hike and ski. The retired couple built a home in the ski village last November and said it's become their permanent home during the pandemic.

"We've been hanging out during this whole deal with the COVID," Bonnie Duchac said. "We've been hibernating and so we go to the Friday fish fries; we take our little boat to the Wine Hut and go hiking. So we just thought we'd join this (cornhole tournament)."

Lee Duchac said he started to play cornhole around four years ago. This is the first time he played the game indoors.

Ryan Leinon, of Montreal, is a golf course member and has enjoyed being on the hill for the entire summer. He's also done a lot of camping this summer and with that comes a fair amount of cornhole, he said.

"This (cornhole tournament) was a last minute deal and I decided to jump in," Leinon said. "It's a crappy day and so it's nice to play the bags inside."

Chad Carlson and Isaac Boehnlein came from Wakefield to play in the tournament. They play in the Wakefield VFW Wednesday night leagues.

"You can do it indoors in the winter," Boehnlein said. "It's a lot of fun. I've met a lot of people and it's been a great way to make some new friends."

The two said the resort setup was nice. The high ceilings of the lunchroom and pool area along with glass walls to watch the action was a nice atmosphere, they said.

"This is my first time here and I'm excited," Carlson said. "I like being able to focus on doing the sport, have a few adult beverages and relax."

Jody Dahl, Whitecap Mountains food and beverage manager, said the resort provided ski passes as prizes along with merchandise and coupons from an area auto parts store. It's a way to help let people know the resort is open all year with rentals, a restaurant and bar, the golf course and the natural surroundings for hiking and skiing.

"This is the first one (cornhole tournament) and we're hoping to have this yearly," Dahl said.

Joe Rimkus and Randy Clemens of Ironwood organized the tournament on behalf of Whitecap. The two are Aurora Club members where they are also organizing a 32-team outdoor tournament on Saturday, Oct. 17. Call 906-285-1736 for more information.

The Whitecap tournament drew 48 players to form 24 teams, Clemens said. The tournament was both social and competitive pool play, he said, with a round-robin first round that puts teams in either category for the second round depending on the scores.

Players came from the surrounding area and as far as Park Falls and Stevens Point, he said. There are a lot of cornhole groups and they have social media calendars of events.

"Once you put an event on the Northern Wisconsin Cornhole you tend to get people from all over," Rimkus said.

The open space inside the resort allowed for six sets of boards with the required 27 feet between them, he said. After a round robin competition the scores divide the players up between the leisure and competition categories.

Whitecap proved to be an ideal location for being able to offer an ideal indoor space with the rain. If it had not rained the tournament would have been equally as enjoyable outdoors, Clemens said.

The serious players in the area went to a major event in Hinckley, Minnesota last week where 300 players competed in a tournament for all age divisions. People came from around the country to complete as the American Cornhole Association ranking system just opened for 2020-21 and will close in June.

The major events are held every two weeks, he said. The next one was held in West Virginia.

"If you earn enough points you can go to the world championships," Clemens said. "Last year it was in South Carolina."