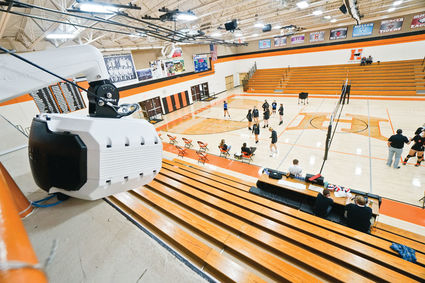 A NFHS Network Pixellot Prime camera that was recently installed in the Hurley K-12 school gym is about to live-stream a volleyball match with Mellen High School on Friday. The camera, along with another installed at Veterans Memorial Field for football games, will make subscription viewing possible for the public who cannot attend games during the coronavirus pandemic.

Hurley - The Hurley K-12 School has come up with a way to provide public access to sports and other events through a live-feed video subscription service.

With the COVID-19 shut down orders, the impact to sports and other school events is to limit or deny any fan participation. Cameras now installed in the high school gym and at Veterans Memorial Field will allow viewers to live-stream games or watch archived games at a more convenient time.

"This allows anyone to purchase a monthly or yearly subscription and view all football, volleyball, and basketball games for the whole year," said Kevin Genisot, school administrator.

The technology for network live-streaming has been around for a while but the opportunities became more readily available after the pandemic, said Steve Lombardo, the school district athletic director and the K-5 principal.

A partnership between the school, the Wisconsin Interscholastic Athletic Association and National Federation of High School Associations led to Hurley joining nfhsnetwork.com, which is a network of live-streaming of sports and events at schools nationwide.

For a one-time $2,500 installation fee, the network installed two Pixellot Prime cameras used for high definition sports broadcasting in the school gym for volleyball and boys and girls basketball and at the football stadium. An additional $1,500 allows Hurley K-12 School to participate in network revenue sharing to earn back funds from every subscriber.

"The overall $4,000 cost was graciously picked up by the Hurley Education Foundation," Lombardo said. "With each subscription the Hurley School District receives a portion."

The school is allowed up to three sponsors and their logos can appear at points during the broadcast, he said. The Hurley Education Foundation is the first and the school is reaching out to other potential sponsors.

To subscribe, a viewer would visit nfhsnetwork.com and choose either the $11.99 monthly subscription or the $70 annual subscription. If the viewer clicks on the Hurley tab while choosing the subscription the school will receive a portion of the funds.

All Hurley home games will be live streamed, along with away games at schools that are also in the network, Lombardo said. In addition, viewers can search for hundreds of other schools around the conference, the state or the country and watch those games as well.

For instance, the Thursday evening Hurley girls volleyball match at Solon Springs School was live streamed because the away school was a member, he said. Viewers can watch other conference games to scout who Hurley is playing next.

The technology is sophisticated but fairly simple for the school to operate, Lombardo said. The game time is entered into the computer and the software system turns on automatically before the game.

"Last night I viewed the entire (volleyball) game," Lombardo said. "The camera moved from side-to-side with the movement of the ball."

It is a high quality picture, he said. There may be some technical issues going forward with new technology but so far it's been smooth going, he said.

The network is sports-driven but schools are not limited to what they broadcast, Lombardo said. The school can broadcast other events in the gym such as commencements or Veterans Day tributes, concerts or other events at the football field.

The one-time fee allows the school to broadcast as much as it likes, he said. Moving forward the school can consider placing additional cameras at the school's baseball and softball fields.