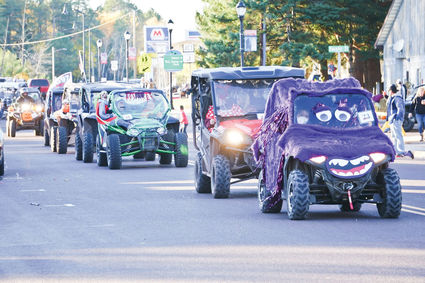 The 18th annual all-terrain vehicle (ATV) and utility task vehicle (UTV) rally is an event for riders to enjoy Iron County trails and routes with stops at local taverns and restaurants as a friendly competition poker run. Riders put hundreds of miles on their vehicles from Thursday to Sunday.

“It’s definitely been going very well,” said Melissa Biszak, executive director of the Mercer Area Chamber of Commerce, on Saturday. “We have over 400 participants this year which is usually around 200 to 250 range. It’s just a great thing in our community, here in Mercer as well as all over Iron County.”

The Pumpkin Run is a joint project of the Mercer chamber together with the Mercer Dusty Loons ATV Club, she said. The Hurley Area Chamber of Commerce and the ATV Association of Hurley also partner so that any bar and restaurant in Iron County can participate if they wish.

The weather was beneficial this year and people saw this recreational opportunity as a way to get out and enjoy the outdoors and the communities in a relatively safe manner during the pandemic, Biszak said.

“This is our fourth year,” said Joyce and Darel Blunck, who came with their dog, Oscar from Union Grove, Wisconsin to take part in the run. “It’s the outdoors and it was a nice weekend. Of the four, this was the best.”

Bill Devlin, of Crystal Lake, Illinois, has participated for the past five years. A friend has a home near Mercer and they try to visit monthly.

“We’ve had some cold weather,” he said. “It’s like a spring day here, and it’s clearing up well.”

Many riders converged on Mercer on Saturday to take part in the Pumpkin Run parade. The event is put together by the Mercer Area Chamber of Commerce and the Mercer Dusty Loons ATV Club.

Kevin Mikols, of Winter, Wisconsin, said he has participated in the Pumpkin Run and the parade for years. He participates in the Mercer Fourth of July parade and the Memorial Day parade in Hurley, and said the Pumpkin Parade is a celebration of fall colors.

Mikols said this is the biggest fall ride he’s seen in several years.

“That’s awesome for the area,” Mikols said. “The county and for Mercer.”

Andy and Casey Schuh, of Park Falls, Wisconsin, brought two of their three children, Millie, 7, and Owen, 3, for the weekend ride and visited the thrift store to decorate the five-seater UTV for the parade.

“We pieced it together with a little bit of everything that was available in the thrift store,” Casey Schuh said. “This is our first year coming and we were surprised at how nice the trails were. Normally when we ride back home it’s not this busy and it was nice to wave at the other riders and every place we stopped at was packed.”

Brian and Julie McNelis of Los Angeles, come every fall to stay in their vacation home to celebrate Julie’s birthday. They take part in the ride and have won the best float prize in past parades and this year the UTV had a “Monsters University” theme based on the Disney-Pixar films.

“We’ve just been laying low and spending a lot of time decorating this year,” Julie McNelis said. “We just cruised around and we haven’t done any of the main activities this year. Just because of the pandemic we’re just more careful on the socializing aspect of it.”

Mike and Karla Labath, of Montgomery, Illinois, said this was their first time in the run and as big Halloween fans they went all out decorating their UTV as a pirate ship.

“I love Halloween season, it’s my favorite time of the year where you get to be a kid again,” said Mike as “T-Bone the Pirate.”

The couple said they rode around 200 miles of trail between Thursday and Saturday. They planned to ride the trails near Lake Superior on Sunday.

“It was fantastic,” Mike Labath said. “We will definitely come back.”

Karla Labath said the trails were beautiful with a lot of variety. There were muddy areas near the lakes that they didn’t want to challenge that weekend but enjoyed getting lost and seeing the sights.

Dan and Lauren Hopp, of McHenry, Illinois, brought their child, Sydney, 3, along with Todd and Lisa Weir. Together they drove much of the Iron County trails over the weekend.

Donald Garrett, Mercer, and a member of the Dusty Loons, said the trails were really in really good shape this year. The parade is a way to get a lot of the riders together at one time to share some of the fun.