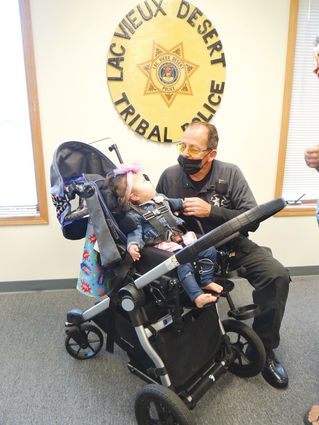 Lt. Nick Christ of the Lac Vieux Desert Tribal Police kneels beside 19-month-old Camillé McGeshick and holds her hand, as the two were reunited for a photo op on Friday afternoon. Christ is credited by Watersmeet EMT Capt. Laura Kopsi, as having saved McGeshick's life after she dislodge her tracheal tube while sleeping on Sept. 2.

Watersmeet - Nineteen-month-old Camillé McGeshick is still alive today thanks to the quick actions of Lt. Nick Christ of the Lac Vieux Desert Tribal Police, according to Laura Kopsi, a captain and EMT with the Watersmeet Fire Department.

On the afternoon of Sept. 2, McGeshick - who suffers from Down Syndrome, along with a congenital heart defect - managed to pull her tracheal breathing tube out in her sleep. Her mother, Celia Brunk, found her unconscious and turning blue in bed after an afternoon nap, and called 911. Christ heard the call over the radio for a baby that was not breathing and immediately took off on foot to assist, as McGeshick's home is only about 200 yards from the LVD police station.

He said he was the first to arrive on the scene, but although he is trained in CPR, he was unfamiliar with CPR when a tracheal tube is involved. Brunk was trained in the correct form of CPR to save her daughter, but according to the report she was "crying uncontrollably" and was not able to focus on what she needed to do. Christ said he was able to get the mother calm enough to focus on saving McGeshick.

"Now, you can be trained all day long, but then when it is actually happening, panic sets in," Christ told the Daily Globe. "Once we got her straightened out, she was like, 'OK do this, move that.' She knew exactly what to do."

Christ said he told the mother that he was out of his element and that she had been trained, that she could cry later, but right then she needed to help him help the baby.

Brunk said this wasn't the first time McGeshick pulled it out, but it was the first time that she had "coded" because of it. She said her daughter usually pulls it out in front of them and they are able to put it back in right away.

Kopsi said that by the time the EMTs got there, approximately 10-15 minutes after the initial call, the baby was breathing again. Christ said that the EMTs were happy with what he was doing and had him continue until she was put in the ambulance.

"It was just so awesome to come in there and the baby had breath," said Kopsi. "If he wasn't there, I don't know what would have happened, the mom was so distraught. Nick is a hero in our eyes."

Christ said he does not consider himself to be a hero, but instead considers himself "lucky."

McGeshick was taken via ambulance to an area by Watersmeet School where the medical flight helicopter could land and then flown to Marshfield, Wisconsin, and was picked up by her medical team and taken to American Children's Hospital in Madison, Wisconsin.

She came home on Sept. 4, but suffered some seizures and had to be flown once again the next day to the children's hospital in Madison. She came home again Sept. 14 and is doing well, but still recovering according to Brunk.

"We are blessed Camillé's here today with us and want to thank, Nick Christ, our very own tribal first responders, all first responders, EMTs, paramedics, flight crew, Marshfield Medical Clinic and her team from American Children's Hospital," Brunk said.