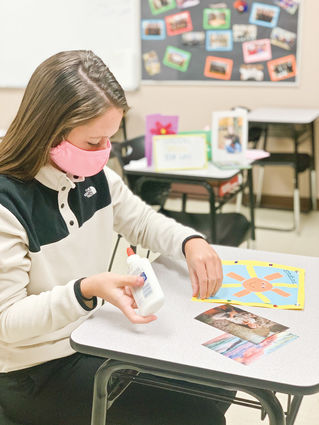 KYLEE MAKI, 17, a senior at Luther L. Wright School in Ironwood works on a card and letter that she will be sending to her new pen pal at the Westgate Nursing and Rehabilitation facility in Ironwood as part of the GOISD CNA program. The pen pal program started last week to engage students and nursing home residents in a relationship, as the residents are no longer allowed to have visitors because of the risk of contracting COVID-19.

Ironwood - Students in the Gogebic -Ontonagon Intermediate School District 's CNA program have become pen pals with the residents at the Westgate Nursing and Rehabilitation Facility Home facility. The residents at the facility are unable to have any visitors, including family, because of the pandemic.

"I think its good cause they don't get to see their family," said Kylee Maki, 17, a senior at Luther L. Wright K-12 School in Ironwood, who is enrolled in the CNA program. "So it will help them because they will have someone to talk to them so they know they are not alone. It gives them something to look forward to."

Maki said she hopes to get to know more about her pen pal and build a lasting relationship. She says the residents are all different and have plenty of different things and life experiences to share with them.

According to Sprague, the students normally spend time with the residents doing arts and crafts, but because of the COVID-19 pandemic they are unable to do so. Instead, Sprague said she got together with Marisa Buerger, the occupational therapist at Westgate and over "coffee and cookies," they created the pen pal program. The long-term goal of the partnership is to have the 27 students and residents build lasting relationships, Sprague said. The short-term goal is for them to get to know the residents well enough before Christmas that they can make a personalized gift basket for each of them.

"I think it's kinda nice, because they are young people; they are young enough to be our grandkids. It's kind of nice of them to do that," said Alan Laitila, 73, a resident at Westgate that is participating in the program. "It will be interesting to see what they want to do with their life and things like that."

According to Buerger, Laitila is usually the unofficial greeter at the nursing home and is very social. When asked what he thought he could or would teach the students, Laitila, a veteran and retired banker, chuckled and said, "I don't know, I might be a bad influence on them." He said he likes to talk to anybody and he is excited to talk to the students and see what they can learn from each other, because there is such an age gap.

Buerger said that her residents, "absolutely loved the idea" of the pen pal program.

Buerger said the residents that were selected for the program generally don't have a lot of family or visitors, and come from both the assisted living side of the facility and the skilled nursing side. She said that some of them might have dementia or other ailments and might not remember everything but the smile on their faces said it all.

"The program I feel is a great way to connect the students with the elderly and obviously the elderly with the young generation. I think it's going to be really cool. I know that they are excited about it and a lot of them are looking forward to getting letters and wrinting letters back," Brueger said.

The students got the opportunity to meet their pen pal via Google Meet on Oct. 7 and will be writing letters to their assigned resident weekly. Sprague said that some tears were shed by students in her classroom as they met their pen pals.

"One of the residents started playing his harmonica and it was all I could do to not lose my composure," Sprague said. "The reality is, it is a very emotional time for my students and the residents."

Nursing students wash and sanitize their hands and work area before working on letters.

Sprauge dropped off the first round of letters and pictures to the nursing home on Thursday. The letters will have to be held for 24 hours before being given to the residents, to prevent the potentional spread of COVID-19. The students and residents will be writing to each other weekly and virtually visiting each other via Google Meet as their schedules permit.

Sprague said that she and Buerger will eventually be inviting an elementary class to start writing to the residents in the future and that the CNA students will become mentors for the "little kids" and then the residents will get a couple of letters a week.