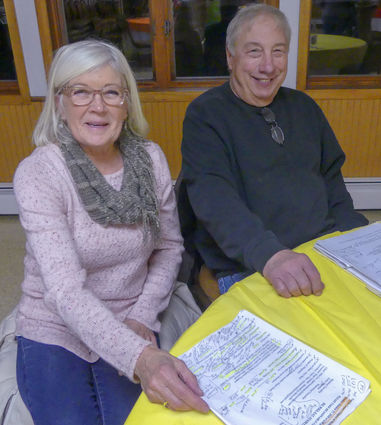 TWO MEMBERS of the Gogebic County Chapter of the Michigan Townships Association pose Tuesday evening after their final meeting while serving as key officers. From left are departing Secretary Vicky Finco and Chair John Cox. The meeting, which rotates among the county's six townships, was in the Marenisco Town Hall.

He said he has appreciated the past couple of years less, owing to the current COVID-19 pandemic and Marenisco's loss of the Ojibway Correctional Facility.

Nevertheless, he concluded, "It's been a pleasure to work with you people."

"It's been a true pleasure to work with you," said Tarnaski, who also serves as a trustee for Bessemer Township. She added that it takes "a special breed of people" to serve the public as MTA members do. "You really are invisible heroes," she concluded.

Voting for new officers will take place at the next MTA meeting in December, which also will feature a Christmas party.

Erwin Township Supervisor Larry Grimsby kidded to the Daily Globe that anyone who does not attend that meeting might learn later that he or she has been appointed the new chair.