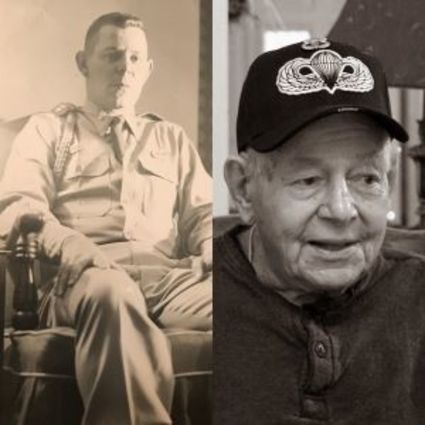 Charles was born on Oct. 11, 1929, in Lawrence, Massachusetts, son of Belden and Hannah (Fox) Bartlett and was the first of four children. As a young boy, Charles loved growing up on a family farm in Derry, New Hampshire, where he helped tend to chickens and dairy cattle with his two brothers and sister.

He attended Pinkerton Academy where he excelled both at sports and academics. He made the dean's list all four years and majored in forestry while attending the University of New Hampshire obtaining a bachelor's degree. Other accolades during college were ROTC and co-captain of the lacrosse team, and he was a member of Scabbards and Blades, which was a military honor society.

After college, he joined the U.S. Army and served as 1st lieutenant in the 82nd Airborne/Ranger from 1953-56 during the Korean War.

After being honorably discharged from the army, he took his first job on the White Mountains of New Hampshire with the U.S. Forest Service; and he would later transfer with the USFS to Kentucky and work as a ranger in the Daniel Boone Forest. Other stints in the USFS would include seven years in Russellville, Arkansas, on the Ozark Mountains as a supervisor in timber management. He later transferred to Bessemer, Michigan, to work as a ranger on the Ottawa National Forest until retirement.

In 1963 in Kentucky, he married a nurse, Marie Therese Mathon, who was the love of his life; and they had two children, Dorothea and Christopher.

Charles eventually bought a farm in south Ironwood and raised beef cattle. He was an avid fly fisherman, a member of the Kiwanis Club and enjoyed anything related to the outdoors. Most of all he loved watching sports and following his favorite New England teams. He was a kind soul with a big heart and will be sorely missed by all who knew him.

He was preceded in death by his parents, Belden and Hannah Bartlett; wife, Marie Therese; and brother, James Bartlett.

A Mass of Christian Burial will be held at Our Lady of Peace Catholic Church on Wednesday, Nov. 4, at 11 a.m., with Fr. Bino Joseph as celebrant.

Rite of Committal and interment will follow the Mass at Hillcrest Cemetery in Bessemer.