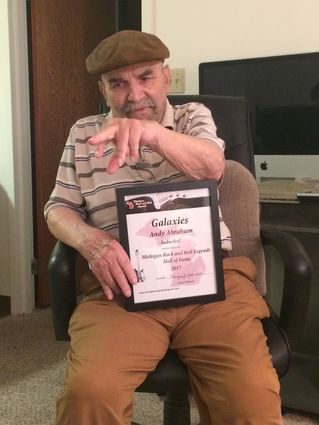 He inherited and learned much of his demeanor from his mother, Nora, a very kind and gentle woman. He graduated from Hurley High School in 1960, and had brief stints at Gogebic Community College and Whitewater State.

He had a love of music from his childhood and had no small talent. He spent his "10,000 hours" alone in his room with his musical instruments. He was a member of the Galaxies, a rock and roll band in the 50's and 60's. They played a multi-state area, had many fans and cut a record or two. They were inducted into the Michigan State Rock and Roll Hall of Fame, and Andrew, being the last surviving member of the group, received the honor for the band.

Andrew traveled to Olympia, Washington and in 1974 with his wife Laura May (whom he loved dearly), and a few friends, built the Rainbow Restaurant.

Andrew had no children, but has relatives and friends all across the country who remember him as a dear brother, friend and mentor. He will be missed by all.

You have finished your course, Andy. Enter into your rest. If the Lord will, we will be with you again soon. Goodbye and God bless.

This obituary was submitted by his brother, John.

Due to the threat of COVID-19, service and gathering will be held at a later date.