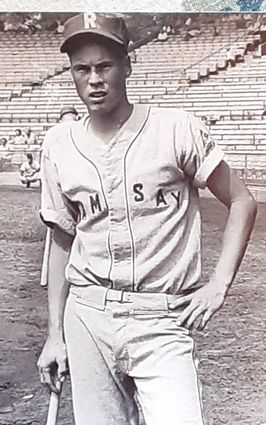 He is survived by his two daughters, Jayme and Joy Smith; one brother, Robert (Susan) Smith of Corpus Christ, Texas; and one sister Carol (Dan) Niemi of Ironwood; one brother-in-law, Richard "Dutchie" (Jean) Valesano; and one sister-in-law, Anita (Valesano) and Douglas Zychowski; as well as numerous nieces and nephews.

He was preceded in death by his parents; Ed and Mildred Smith; two sisters, Marlene Pavlovich and Mary Ann Frazier; and his beloved wife of 53 years, Margaret "Peggy" Smith (Valesano).

Ed graduated from A.D. Johnston High School in Bessemer in 1958. Upon graduation he attended Gogebic Community College, where he was an outstanding basketball player for the Samsons. He then went on to attend Mankato State University in Mankato, Minnesota, and received his bachelor's degree in social studies. After that, he attended Western Michigan University in Kalamazoo, to receive his master's degree in guidance and personal services.

Ed began his teaching and coaching career in Bergland High School in Bergland, where he coached boys varsity basketball for nine years. After this he went onto Hurley High School, where he coached boys varsity basketball and baseball. Hurley back then was in a tough conference, with Hurley being the smallest of the schools. He still managed to win a Class B title and Class C title in the 1970s. He fondly remembered the Midgets had an outstanding following to the Spooner Sectional under the famed radio voice of Harry Rizzie. He greatly appreciated this tournament.

In 1982, he took a position at Wakefield High School as a teacher, guidance counselor and athletic director. In 1986, he began coaching girls varsity basketball when his daughter, Joy, was a junior. They had many successful seasons, winning numerous conference titles and one undefeated season. At WHS he sought out better coaches, organized gym time schedules for players and improved traveling to away games.

He officiated high school boys basketball and was chosen to officiate downstate in Ann Arbor for the Class C boys state semifinals. He went on to officiate at Northern Michigan University and Gogebic Community College. He was the president of three high school conferences - Porcupine Mountain Conference, M-W Conference and Great Western Conference.

Ed enjoyed playing softball for the White Birch Wildcats as well as being an outstanding baseball player and was chosen among 78 players for the Silver Sluggers award. He participated in a game with the Milwaukee Braves at Milwaukee County Stadium with his parents in attendance.

After retirement in the 1990s, he traveled the country, attending basketball tournaments with his brother, Robert. He went on numerous hunting and fishing trips with his longtime "Super Bowl" buddies and took his family camping to Glacier and Yellowstone national parks. The Smith family enjoyed picnics and were never short on competitive whiffle ball and kickball games that the whole family enjoyed. He spent numerous days and nights with his family and friends playing cards at his beloved camp on the Slate River. Ed could also be heard across the airwaves for WJMS with Gary Aho broadcasting local sports. He proudly announced his daughter's district title game in 2004 and even got to interview her afterwards.

Ed lived his life to the fullest and achieved and accomplished everything he set out to do. His family will miss him greatly and he will not be forgotten. The family would like to thank the staff at Crossroads Care Center for the exceptional care they took of dad in his final year.

The family wishes to extend their thanks to Jerald Rocco of Lakeside Memorial Chapel for his compassionate care during this time. And a special thank you to Gary Silc, a longtime friend and attorney, for not only being Ed's best friend, but a loyal confidant to his daughters, he could always be counted on.

The family is planning a gathering to be held at a later date.