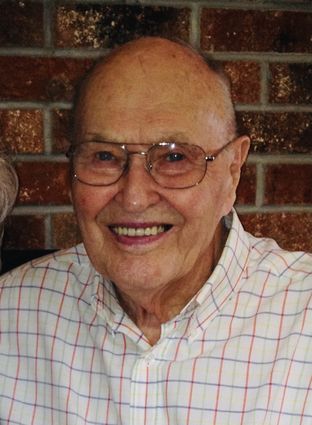 Ralph was born to Esther and Gotfred Swanson in Iron Mountain, Michigan, on May 24, 1920. He graduated from high school there in 1938, and attended Michigan Tech University, graduating in 1942 with a degree in forest production. Ralph was an ROTC member, and upon graduation, he reported to duty in the U.S. Army, serving in World War II in England, North Africa and Italy.

When he returned home, he met and then married Harriet Nelson, a former World War II Army nurse. They were married at the Little Brown Church in the Vale, in Nashua, Iowa, on Sept. 21, 1946. They resided in Ashland, raising four children, where Ralph began a 40-year career in forestry.

Ralph was hired by Consolidated Papers Inc. (CPI), as a camp clerk at Loretta in January 1946. In 1947, Ralph began supervising the pulpwood rafting and loading operations in Ashland for 21 years, during which CPI rafted primarily spruce pulpwood from bays and harbors in Canada and Minnesota, across Lake Superior to Ashland. In 1968, Ralph went to Wisconsin Rapids as Central Wisconsin District Superintendent; in 1973, he was named assistant manager of CPI's Timberlands Division; and in 1974, he was named manager, the position he held until retirement in 1985.

Ralph received many recognitions, including: the Fellow Distinction of the Society of American Foresters, Lumberjack of the Round Table, and the Award of Merit from the MI-WI Timber Producers Association, Wisconsin Society of American Foresters, John Macon Award, American Pulpwood Association-50 Years of Service Award, and he was inducted into the Wisconsin Forestry Hall of Fame in August 2020.

Ralph enjoyed the woods and instilled a love of the woods in his sons. He took them to the woods any chance he could, to go hunting or cutting pulp wood. Although money was tight, he was able to acquire some land which had recently been logged off and of little monetary value. He began planting trees and cutting in roads, never intending to make money off of these parcels, but knew with his forestry skills and hard work, this land would be valuable, and he intended to give it to his children.

Ralph loved to hunt and was an excellent shot. However in his latter years, while out hunting with his son, Ron, he said, "I don't have the heart to shoot the animals anymore, but I love to be out walking in the woods." At their Winchester home, feeding the deer became a priority for him and his late wife, Harriet. The deer knew they were safe there and would walk up to them, often eating out of their hands. Ralph enjoyed traveling with Harriet, teaching his grandchildren about the woods and maple syrup making, taking them on exciting rides through the woods on his "Otter," and taking family and friends on summer pontoon rides. Grandchildren remember Ralph as always happy and smiling.

Ralph was a long time member of the Living Hope Church, Winchester. A favorite scripture was Isaiah 55:12, "For you will go out with joy and be led in peace; the mountains and the hills will break into shouts of joy before you, and the trees of the field will clap their hands."

Ralph was preceded in death by Harriet, his beloved wife of 73 years; and Ben, his only brother, of Marquette, Michigan.

The family would like to thank the staff of Avanti Rehab Center (Minocqua Health and Rehab Center) for the wonderful care and love they provided for Ralph, especially during this time of COVID-19, when family could not visit inside.

Ralph will be laid to rest with Harriet, in Iron Mountain. Details of a memorial will be announced at a later date. In lieu of flowers, the family requests memorial donations be sent to the Ralph and Harriet Swanson Endowed Scholarship Fund at Michigan Tech Fund, 1400 Townsend Drive, Houghton, MI 49931. Condolences and cards may be sent to Jim Swanson, 1905 N. Pine Bluff Road, Stevens Point, WI 54481.

Online condolences may be shared at nimsgernfuneral.com