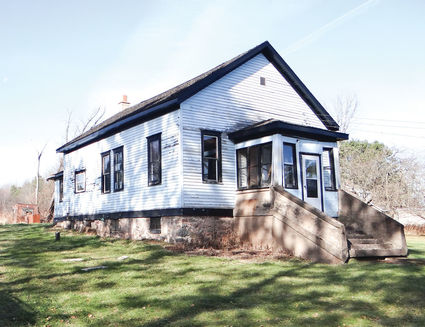 The East End School, seen here last week, was purchased by the Erwin Township Historical Society on Sept. 15. The schoolhouse, located on East End Road, was one of five schoolhouses in operation in the township at the turn of the 20th century. It was built in 1915 and functioned as a school from 1916-1928. The society plans to restore it to its original condition and use it as a museum, research center and community meeting place.

Historical society president Tom Pelissero said they are looking not only to create a museum, but to make an asset for the community.

"If we are going to tell future generations about the history we should have a home in which they could come to, but we want them to use it for the community - have other meetings here," said Pelissero. "History is part of what they would enjoy doing but how else can they use it? Come and do your family research here. It is just an exciting time for us."

According to Pelissero, finding and securing a building was the "No. 1 priority" for the newly formed historical society. The artifacts have been housed at the Township Hall, but he said they take up a lot of room there, and by moving them it will free up space for the hall to be used for other township events.

The historical society purchased the school on Sept. 15.

"When we started our historical society 17 months ago, we said, 'OK, what are the historically significant buildings in the community and if we could purchase one to be our artifacts museum which one would it be,'" Pelissero said. "It looks tough, but the bones are really good on this building. It was well constructed. It was government built. They really built it to last. It is 115 years old. The walls are still straight. It is solid."

He said East End School is one of five one-room schoolhouses that were built in the township at the turn of the century. It served as a school from 1916 to 1928. It was later converted into a private residence, and remained as such until the society purchased it in September. The other schools were Central School (built in 1907), Bonnie School (1915), Van Buskirk school (1911) and Black River School (1923). Erwin Township children ages 6 to 15 attended these schoolhouses until the Erwin Central School was built and replaced the one-room schoolhouses in 1928.

"You got to think, turn of the century there were no buses, let alone vehicles, so these kids had to be able to walk here to school, so they dropped in these one room school houses," said Pelissero. "If these walls could speak, imagine the stories they could tell about these kids and what their life was like."

Pelissero said Stephen Zielinski, the owner of the East End School, was not only willing to sell it to them, but offered a fair price of $10,000 for the school and the one acre of property it is on. The purchase was made possible through member donations, Pelissero said.

"The people in Erwin are so tight and they love this community. It was a different way that they lived back then. They worked hard on their farms. They worked in the mines. ... So the idea that we could start a historical society in a community of 300 people and have a couple hundred members is kind of mind boggling and they've opened up their pocket books to help," Pelissero said.

The society plans on restoring the building to how it would have looked at the turn of the century, including putting a bell on the roof. While the original East End bell is gone, they've located the bell that once was on top of the Van Buskirk School. He said that bell was found in Chicago and returned to the township. He said the bell is etched with the name of the original school on it.

"There will need to be extensive restoration, before we can move into the building, but we are excited to have a building we can call home," Pelissero said in the ETHS newsletter.

Pelissero told the Daily Globe that he is confident that when they put up a call for help to restore the school that the people of Erwin Township will show up with their tools and they'll get to work.

"Our history is important and we're making history every day here in Erwin Township and we want to share that," Pelissero said.

The society is hoping to start the restoration process of the East End School next summer.