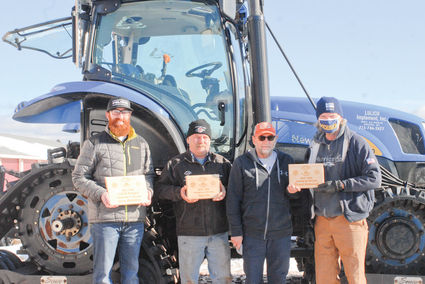 THE GOGEBIC Range Trail Authority recognizes several of its volunteers and supporters Tuesday at its groomer barn in Bessemer. Those receiving awards were, from left, club president Steve Hamilton as the Calvin Kangas volunteer of the year, Dan Cox as groomer of the year, Sam Davey and Bob Burchell on behalf of the Ironwood Tourism Council, which was named sponsor of the year.

BESSEMER - Despite the ongoing coronavirus pandemic, the Gogebic Range Trail Authority still wanted to recognize its supporters and volunteers for their contributions to maintaining the snowmobile trail system in western Gogebic County.

Although the pandemic prevented the large gathering at the club's traditional banquet, GRTA officials had those being recognized gather at the GRTA grooming barn in the Bessemer Industrial Park Tuesday.

The club awarded president Steve Hamilton with the Calvin Kangas volunteer of the year award, Dan Cox as groom...