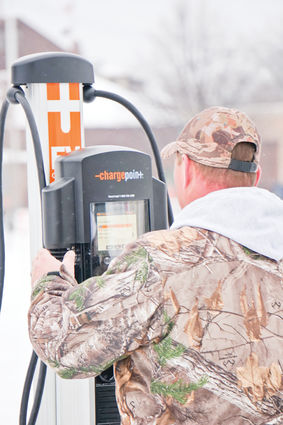 Jason Green, an electrical foreman with ASG Electric in Madison, Wisconsin, installs an electric vehicle charging station at the Downtown City Square in Ironwood on Tuesday.

Ironwood - A new feature at the Downtown City Square will help bridge the distance that electric vehicle drivers have to travel between charges in the Upper Peninsula and northern Wisconsin.

A technician was in Ironwood on Tuesday to install a Chargepoint electric vehicle (EV) charging station on the city square's south parking lot along West McLeod Avenue. The station has two pay charging outlets that can fully charge a vehicle in around two hours.

"People do call the city to ask about charging stations for when they come through Ironwood," said Tom Bergman, city community development director.

Until now, people have been directed to the RV charging outlets at Curry Park, he said. This is not convenient as the chargers there take many hours to fully charge and are not available in winter.

"This charger is right downtown so that if somebody is passing through on their way to Marquette, and they need to do a two-hour charge they can park at the city square and walk to our downtown businesses," Bergman said. "The idea of it is that it's an economic development tool to have people stop that normally wouldn't stop in our community."

Travelers who have an account with Chargepoint will be aware of the Ironwood location via the app which shows all station locations on a map.

To use the charger the driver downloads the chargepoint app to create an account and is notified of nearby charging locations. The driver holds his or her phone next to the charging station screen to activate the card reader and make the transaction.

Until now, there was no public charging station in the area. The Chargepoint map lists the nearest locations as Houghton and L'Anse in the U.P. , and Three Lakes, Rhinelander and Superior on the northern Wisconsin side.

The Ironwood City Commission approved the $2,400 annual lease with Chargepoint in August. The company leases the equipment and charges the city an annual fee.

The lease is an advantage in terms of ensuring the company does the upgrades and replaces it when it becomes obsolete, Bergman said. The company also handles the accounting in terms of online sales.

"They advertise the location for the city and people who use the charger use a charging account and the city gets paid a percentage," Bergman said.