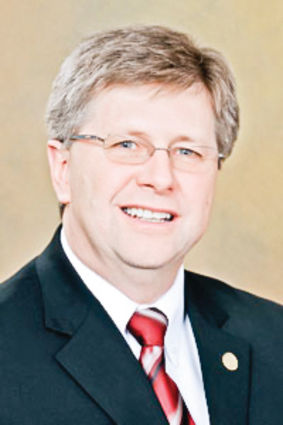 ESCANABA - Tom Casperson, who represented Gogebic and Ontonagon counties in Lansing for seven years as a state senator, died this weekend at the age of 61.

Casperson, a Republican from Escanaba, died Sunday. He had been diagnosed with cancer.

Fellow Republicans in the Senate called Casperson a "titan of the Upper Peninsula."

State Sen. Ed McBroom, R-Waucedah Township, who succeeded Casperson in representing the western end of the Upper Penisula as part of the 38th Senate District, remembered the man he called, "A brother, a friend, a mentor, a confidant and a partner in both work and fun."

"He helped me get into professional politics and guided me every step of the way. To say that he meant the world to me would be an understatement," McBroom said in a statement.

"He fought the good fight - in the logging business, in the halls of the state Capitol, against cancer - and did so humbly, with dignity and grace, yet with the spirit of a world champion. He attacked everything with passion. Big or small, he made the people's issues his issues. To have Tom Casperson on your side was to have a teammate unwilling to quit, and that is part of what made him such a beloved and effective legislator in the U.P.," McBroom said.

Casperson served six years in the House and eight in the Senate before being forced out by term limits after 2018. Casperson attempted a run for Congress in 2016, representing the state's 1st Congressional District, but was defeated in the Republican primary.

"Tom Casperson was an unwavering public servant, who made sure Yoopers always felt like their voices were heard in our state Capitol at every point during the legislative process. While our politics varied, Tom proved that it was still possible to find common ground and work together to do right by the people of Michigan," Gov. Gretchen Whitmer said in a statement Monday. "As Senate Democratic Leader, I was proud to work across the aisle with state Sen. Casperson to expand health care coverage through the Healthy Michigan plan, which now ensures coverage for more than 800,000 Michiganders across our state. Despite his diagnosis, Tom remained committed to doing the people's work as he battled this vicious disease. My thoughts are with Tom's family during this difficult time."

"As colleagues and friends, Tom and I shared many moments together, often in the car during hours-long commutes listening to the Packers on the radio," said McBroom. "But what I most cherish is our shared love of our Lord and Savior Jesus Christ. That bond of faith helped each of us through many discouragements and hard moments when the way to live our faith was anything but clear. For me, he was the embodiment of Proverbs 27:17: 'As iron sharpens iron, so a man sharpens the countenance of his friend.'"

Casperson was a conservative voice on taxes and regulation who frequently criticized state agencies for how they regulated wetlands and forests, the Detroit Free Press reported.

He cast a key vote to expand Medicaid during Gov. Rick Snyder's administration. Casperson was praised by unions for voting against right-to-work legislation, which made union membership voluntary. The bill, however, was signed into law.

"He was a constant champion of the U.P., and gave voice to those too often left out of the process." said Dan Scripps, chairman of the Michigan Public Service Commission.

A release lowering the United States and state of Michigan flags across the state in Casperson's honor is expected to be issued following the announcement of funeral arrangements.

Editor's Note: The Associated Press contributed to this story.