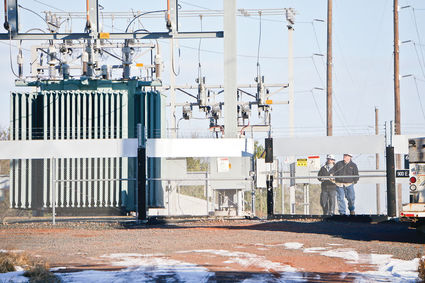 Ironwood - Around 1,500 Xcel Energy customers were without power for about an hour Wednesday morning following an equipment failure at a local substation.

An 8:41 a.m. a power regulator failure at the Ayer Street substation, at the intersection of Easy Street in Ironwood, was the cause of the outage, said Christine Ouellette, senior media relations representative for Xcel Energy's Michigan and Wisconsin office in Eau Claire. Technicians immediately started work to transfer the 1,490 impacted customers over to different power feeders by 9:40 a.m., she said.

During the outage there were four-way stop signs placed at intersections with non-working traffic lights along U.S. 2 at Lake Street and Luxmore Street. The traffic lights were working again by 10 a.m.

Super One Foods closed just after the outage started at 8:45 a.m., said Lisa Ward, front end manager. It took until around 9 a.m. to clear the store, she said.

The store has emergency generators to keep the freezers and refrigerators operational during outages. Workers are also trained to respond to outages by placing covers over the open coolers, she said.

"We did our emergency drill," Ward said.

Other businesses were also forced to temporarily close. The McDonald's restaurant drive-thru workers were offering coffee and drinks only and could not offer food during the outage.