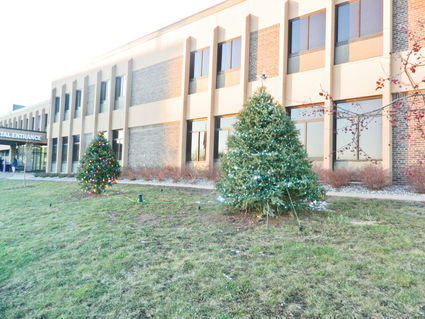 THE TREES of Love and Celebration are lit up in front of Aspirus Ironwood Hospital. This year the hospital opted not to hold their annual ceremony due to the COVID-19 pandemic.

Ironwood - The "Tree of Love" and "Celebration Tree" at Aspirus Ironwood Hospital were lit for the holiday season Tuesday, but without the ceremony that traditionally accompanies the tree lighting. A maintenance man simply flipped a switch at exactly 4 p.m. to light the trees, without an audience and as nearby staff continued with their work.

"We aren't having the ceremony this year. We are doing a virtual video," said Alicia Cook, the liason for the Aspirus Ironwood Auxiliary, which puts on the event every year. "Due to the COVID-19 pandemic we did not want to gather in person."

This is the 30th year the hospital auxiliary has lit up the two trees located near the hospital's emergency room entrance. The "Tree of Love" is lit as a tribute to those who have died, while the "Celebration Tree" commemorates any births, graduations, weddings, anniversaries or other special occasions that occurred over the last year.

The public is able to sponsor a light in tribute to events of the past year for a minimum donation to the auxiliary. Every light on each tree represents either a person that passed or a special occasion that has occurred.

Funds raised from this year's event will go toward the renovation of the obstetrics ward, Cook said.

She estimated that they had 400 donors this year. Cook said that the event typically generates about $5,000 in donations, but that it is considerably less this year.

"This year they are lower and I think a lot of that is due to the pandemic and everything else," Cook said. "Our gift shop has been closed since March and that's usually where people would pick up the forms. There, or in the hospital."

Cook said a video will have a lot of the elements of the traditional ceremony including the choir, a scroll with all the names (of the departed and those celebrating events), and a prayer given by Father Frank Kordek, of St. Mary's Catholic Church in Hurley. The video will be released virtually onto the hospital's website, Aspirus.og, and its Facebook page.

She said they will also have booklets available listing the names of the people and events that this year's trees recognize.

The video and the booklets will be released on Dec. 18, Cook said. Those that sponsored a light will receive a copy of the video via email. The booklet will be available throughout the hospital and mailed out to donors.