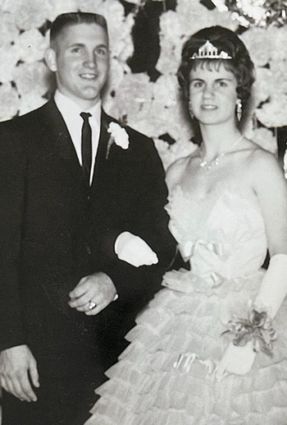 Born Dec. 25, 1944, in Ironwood, a daughter of Leo and Agnes (Mlasko) Lampart, Carol was raised in Bessemer and was crowned Junior Prom Queen with her Junior Prom King Thomas J. Manninen in 1962. She graduated from A.D. Johnston High School, Class of 1963. She enrolled at Gogebic Community College and later attended Eastern Michigan University, matriculating at Northern Michigan University.

On Aug. 27, 1966, Carol was united in marriage to her high school sweetheart, Thomas J. Manninen. Throughout the years, the couple resided in Colorado, Texas, Minnesota, Michigan and Alaska. While in Pipestone, Minnesota, Carol gave birth to her son, Scott Thomas.

Carol enjoyed Little Falls, Minnesota, teaching at Lincoln Elementary and her home on the banks of the Mississippi, until returning to the Upper Peninsula, settling in the Ontonagon area and commuting to work in special education at Bergland. A relocation to St. Clair, where she taught in Algonac and received the honor of Teacher of the Year for Special Education 1992-93. The family made a later move to Kenai, Alaska, where she ran the Infant Learning and Child Development program for Frontier Community Services and then to Anchorage where she was employed by the state of Alaska's Department of Health and Human Services as an infant learning and child development specialist. She received the Early Intervention Provider Award in 1998.

Carol loved her career as a teacher, inspiring, challenging, and mentoring young minds into being better individuals. Her main focus was family and career. She enjoyed the basic elements of life, travel, walks with her dog and tennis racket, dancing, a love of animals, listening to music, her innumerable dogs and cats, viewing wildlife, and being a prolific reader who often finished a book in less than two days.

The Upper Peninsula beckoned and the family relocated to the Marquette area in 2006. As her health declined, Carol loved receiving cards and calls by cherished family and friends, warm cuddles from her adopted feline sibling duo of April and Chips, and watching ducks effortlessly swim across her backyard pond. She also immensely enjoyed her once a month trip to the hairdresser and trips to Younkers and Starbucks on her way home.

Honoring family wishes, a memorial service will be held in the spring. Interment will be made in the Hillcrest Cemetery in Bessemer.

Fassbender Swanson Hansen Funeral and Cremation Services is serving the family, where condolences may be expressed online at fassbenderswansonhansen.com.