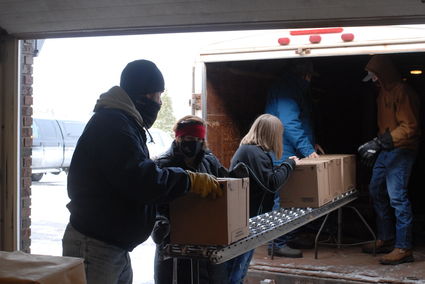 Richard Jenkins/Daily Globe Jerry Mazurek, from left, Michelle Trier and Kristina Recla move boxes along a conveyor belt into a truck as the food collected during the Michigan State Police Wakefield post's annual Harvest Gathering food drive is distributed Tuesday at the post.

"Just before Christmas, I think the pantries are going to be well supplied for the people who need it,"  said Lt. Donald Horn, commander of the Wakefield post.

The post's food drive, in partnership with Super One, raised over 20,000 pounds of food for food pantries in Ironwood, Bessemer and Watersmeet.

The donations will help meet the increased need that some of the local pantries have seen since the start of the COVID-19 panic. 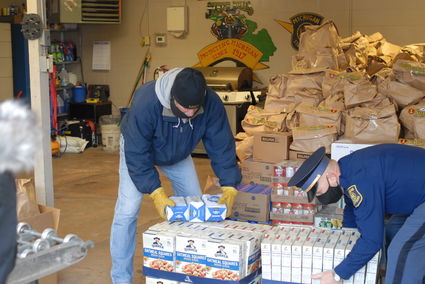 "This is a real big help for our community and we appreciate the Michigan State Police for doing this," said Dave Marczak, a volunteer with the St. Vincent de Paul food pantry in Bessemer. "It's going to feed a lot of people."

Although the 29,570 pounds collected over the two-week food drive was a little less than last year's amount, Horn said he was pleased with this year's effort.

"We're a little off last year but not too bad," Horn said, adding the pandemic presented a variety of challenges and delayed the effort.

"Normally, we do it in October but we did it in December. We were hoping the COVID would let up," Horn said. "We almost canceled it but the need was too great, and I had people pushing - wanting us to do something - so we decided to give it a try and it worked out good."

The post has been collecting food donations for around 20 years, according to Horn, but the large amount of donations really started in the last eight years.