The pasty traveler; a culinary ambassador 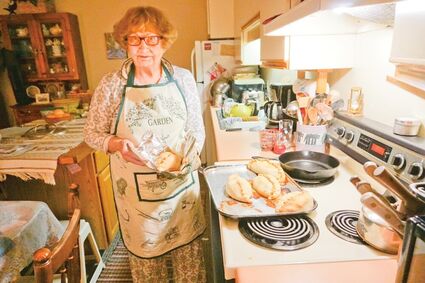 Jeanne Olsen is shown in her Ironwood home, after recently returning from North Carolina, where she spent Thanksgiving with her daughter's family and taught a pasty making class for friends of the family.

Ironwood - Jeanne Olsen's travels around the country to visit her children have also made her somewhat of a culinary ambassador.

The Ironwood resident says her five grown children grew up eating pasties and that prior to each of her visits, she shops her favorite area bakeries to bring dozens of them with her. While visiting, she is also invited to hold a pasty making class for family friends and relatives, including her recent Thanksgiving trip to be with her daughter's home in Cary, North Carolina.

"I bought 23 frozen pasties," Olsen said. "That was my carry-on but they put the heavy bag in the cargo hold and it moved with the regular luggage."

The two week trip started with a flight out of Ironwood to Chicago and then to Raleigh-Durham. It was the first time she has traveled since visiting her son and his family in Oregon, when she returned just before the COVID-19 pandemic started there in early 2020.

Olsen said she was nervous about traveling during the pandemic, but that the flights were not crowded.

Flight attendants handed out wipes and masks, she said. One couple near her wore a plastic shield in addition to masking. They took the shields off while sitting together during the flight.

"I left my mask on, it didn't bother me," Olsen said. "It was a nice flight and the people were very nice."

"In Raleigh, everyone was wearing masks and there weren't big crowds," Olsen said.

The usual visit with her daughter would mean big holiday meals with 12 to 14 guests, she said. This year there were just five to include her daughter's family and herself.

Olsen agreed to one exception when two of her daughter's friends wanted to come over for a pasty lesson. The last time Olsen visited her daughter posted a "pasty party" announcement on social media.

"They've never had pasties down there," Olsen said. "A lot of people don't know what a pasty is."

Olsen said one of her daughter's friends, who is originally from Argentina, watched her make a pasty and described them as "giant empanadas."

"They make a meat pie, too, but it's more like an hors d'oeuvre," Olsen said.

Olsen said she explains to the guests that there are many, many pasty recipes and that hers are rooted in the same Cornish tradition that the English miners brought to the Upper Peninsula. Her Finnish grandparents' generation adopted the popular workers meal and put their own stamp on it.

"I don't know how most pasty recipes go, but I tell them what I do," Olsen said. "I try to put in more meat."

In her experience the meat shrinks as it loses moisture while baking. The vegetables on the other hand, absorb water.

"That's why I put in as much meat as I do vegetables," Olsen said. "I don't want them to look like they're all potatoes. I want more meat or at least half-and-half."

Olsen made the pasty crust the day before the class but talked the guests through the process. Her crust recipe includes a blend of lard and shortening, she said.

She uses a food processor to reduce the time and labor in chopping potatoes, carrots and rutabagas. Some recipes call for just meat and potatoes but no matter the recipe it's important to chop the vegetables small.

Some people don't like rutabagas, but Olsen said she chops up from a half to a whole rutabaga for every four potatoes. She chops them small so that it's difficult to tell the difference.

"The plain meat-and-potatoes pasties are bland," she said. "I like the Cornish ones with the rutabagas and carrots for a little more flavor."

Olsen enjoys experimenting with her cooking, including with her pasties. She is always looking for recipes and will adjust the seasonings and ingredients of her own to try things out.

"I am debating trying a recipe for a new pasty crust that you make using boiling water," she said.

The guests did the work in the class,Olsen said. She just taught them the measurements. They wanted the "authentic" experience, she said.

"They all loved them," Olsen said. "They all really like pasties and they like to be able to pick them up and eat them if you want, but we ate them on plates with forks."

During the class Olsen, who was raised in Ironwood, related the stories about her experiences eating pasties with her grandfather who was a mule driver for the mines in Wakefield.

"You can eat them hot or cold," Olsen said.

Olsen's other daughter living in Arizona is researching to see if the pasty tradition or something similar was carried on with the miners of that area.

Olsen is an avid reader and history buff. Her father, Tom Vizanko, was a teacher, coach and principal of the former Sleight Elementary School. He was also the first director of the Gogebic County Community Action Agency and coached Ironwood's semi-pro hockey team.

Olsen has endured the premature deaths of two husbands and survived leukemia with the help of her brother's bone marrow. She has been cancer-free for 23 years.

Olsen said she will enjoy getting out more and doing some more traveling when the pandemic passes. She is not accustomed to going so long without seeing her children, grandchildren and great-grandchildren.