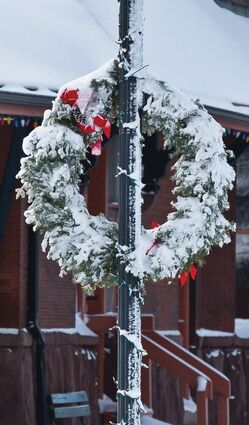 Jason Juno/Daily Globe A Christmas wreath, loaded with recent snow, hangs on a lamp post between the Ironwood post office and the Depot Museum Friday morning.

IRONWOOD - The 12th Sisu Ski Fest will be a virtual event but organizers are excited about the prospect of the alternative event as they sent out registration packets on Monday.

The difference this year is that there will not be a one-day event with a Sisu course and racers throughout Ironwood. To avoid the congestion of skiers, volunteers, observers and weekend events around the Sisu, the virtual format allows participants to ski area trails or at their own locations and report their times.

"We encourage them to use an app or some type of GPS device," said Jackie Powers Sisu race director. "It is required to win an overall prize but it is not required to race and win one of many door prizes just for participating."

There are no second-thoughts when looking back at the decision to transition the annual race to a virtual format this year when the registration period opened in October, she said. The decision is still applicable to the current COVID-19 situation and it would still not be safe to hold the one-day race with the weekend events surrounding the ski fest, she said.

"There was no way that we could have had a normal event like we usually do," Powers said.

While there won't be a race course through town or a "Finnish" line downtown to greet, fans can follow the posted results and other information on the Sisu Facebook page and Sisu website, she said,

"We may have a few people in town but it won't be like in past years," Powers said. "There will be no race course throughout town and so they probably won't even notice that the race is going on."

The competitors ski on their own and report their times. There is a system for determining overall winners and there will be prizes and random drawings for others who compete.

The registration numbers are down from usual but there is still time to register up to the day before the race, she said.

Sisu will have a kickoff on First Friday, with a live virtual concert performance from Andy Mackey from the Historic Ironwood Theatre. The concert will be streamed live on the Sisu Facebook page and website.

Felicia Santini, a Sisu volunteer, said she is pleased that the event is happening even as a virtual competition. She won't need to do her normal volunteer routine on the trail, at the aid station or the festival events but it is still exciting to be part of the virtual event, she said.

"I think it's important that people don't forget by next year and so they still want to come for Ironwood," Santini said.

Santini and her fellow volunteers packed the registration forms along with event sponsor goodies that they would normally get when they come to Ironwood. The packet included energy bars and drink powders along with the 2021 Sisu neck gaiter that was designed by Kay Lum in Madison, and manufactured by Borah Teamwear. Lum designed the Sisu T-shirt and hat for the 2020 ski fest.

"It's different every year," Santini said.

Also included in the packets are individual packets of energy drink powder. In a normal year the powder would be provided in 5 gallon containers for Sisu volunteers to mix with water and hand out for skiers on the course at aid stations.

Another part of the decision to go virtual rather than cancel outright is the Sisu mission to "promote the sport of cross country skiing, encourage safe local tourism, and advance local pride through a premier cross country ski event." The organizers said the virtual event is meant to bring "levity, relief and focus" during hard times.

The 2020 Sisu event brought 750 skiers to Ironwood, who participated in the 30K Sisu Classic Skate, 30K Freestyle, 15K Heikki Lunta or 5K Hauska Hiihto in both classic and free-style divisions. A two-week virtual event will allow hundreds of skiers to compete on their own over a two week period.