Building a tradition of spirit 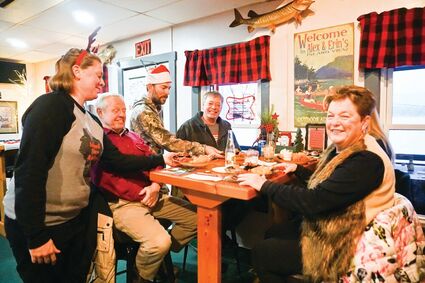 MERCER, Wis. - The second annual free Community Christmas Feast at the Island View Lodge was not anticipated to be a big event due to the pandemic but it was a success no matter how you look at it, according to the owners and guests who attended on Friday.

Last year there were around 17 people who came for the first free Christmas dinner, said Erin Doonan, who owns the resort with Alex Barnes. Many of those guests were senior citizens who saw the flyer at the Mercer Senior Center, which is not open now because of COVID-19.

But turnout was about the same and the organizers said the spirit of the event will carry it forward.

John and Nancy Heimburger of Springstead brought their friends Ron and Sue Hagen, also of Springstead. They said the drive itself after the fresh snow was worth the trip.

"It's a perfect amount of snow on the trees and it was a gorgeous drive in," Nancy Heimburger said. "This just sounded like fun, something different and enjoyable, and we don't have to cook."

"Our house will be turned upside down for a while," Ron Hagen said.

So without family here on Friday, the resort meal sounded like an enjoyable way to spend Christmas Day with friends.

"We got to talking yesterday and they (Heimburgers) invited us to come up with them," Sue Hagen said.

Barnes and Doonan took over ownership of the resort in April 2019, were inspired to start the Christmas meal from a free Thanksgiving event they attended regularly at a church in Estes Park, Colorado. The event grew from a small dinner into a major community event.

"We loved Thanksgiving just because of that, and we're hoping that this turns into something fun for people to do," Doonan said.

There are also a few who travel quite far for the Christmas dinner, Barnes said. But most are area residents who are separated from family, including themselves.

"We're here anyways and so we might as well give people who don't have family or anything some place to go," Barnes said.

James Hannemann said he and his wife, Kathy drove 30 miles from Lake of the Falls to attend the meal. They attended the first meal last year with their two sons, who could not be here Christmas Day, and so he put on his "Grinch tie" to return this year with Kathy - who he said is tired of cooking.

Doonan said they prepared a ham dinner because most people already had turkey for Thanksgiving. The dinner also included au gratin potatoes and a special baked beans recipe from the resort's previous owner, stromboli, fruit salad and desserts that included kringle from a Racine bakery, near where Doonan once lived.