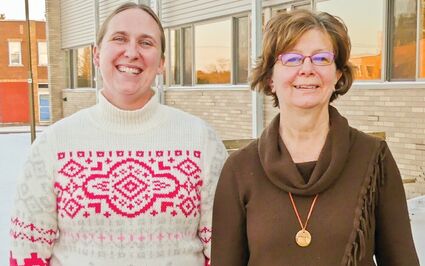 INCOMING AND outgoing treasurers for the city of Wakefield pose outside of the municipal building on Dec. 17. From left is newly hired Mandy Lake and Sherry Ravelli, who retired after 16 years with the city.

Wakefield - Outgoing City Treasurer Sherry Ravelli imagined Dec. 17 as a final "relaxing" day as she said her good-byes and enjoyed pizza, cake and other treats with coworkers of the past 16 years.

In an interview at the end of that day, however, she noted that she actually had been unusually busy due to routine auditing.

"They're going to make me earn my pay right up to the end," she said, kidding.

Although her final hours also included gifts from fellow workers, Ravelli's last weeks with the city had the added responsibility of training newly-hired Treasurer Mandy Lake.

The COVID-19 pandemic in recent months has added more confusion to everyone's plate. "I don't think anything has been normal this year," said Ravelli, who began working for the city in 2004 as a utility payroll clerk, a position she held for four years until former Treasurer Ron Langley retired.

Prior to joining the city, Ravelli spent 27 years working for First National Bank of Wakefield.

"I started as a teller," she said, adding that she then did secretarial work and resulted with a position as an administrative assistant.

She also studied business and accounting at Gogebic Community College while raising her sons, John and Justin.

She was inspired to take on the role of Wakefield treasurer in part because former City Treasurer Pat Mann encouraged her.

"The core group of people that we have here are good at their job," she said, explaining that employees sometimes have "differences on little things," but still commit to doing their work anyway.

"I think the city is going in a very good direction," she said, adding of the current city manager, "Robert works tirelessly."

Ravelli said one of the hardest aspects of her job is juggling all of the various duties while "deciding priorities" in the face of other staff needs.

"Training is important," she noted, explaining that sessions - including webinars - offered by the Michigan Municipal Treasurers Association provided ongoing guidance while also allowing interaction with other treasurers around the state.

Incoming Treasurer Mandy Lake laughed as she said that the hardest part of her training in recent weeks had been the auditing.

In general, however, she said that Ravelli's organization had helped to set her in the right direction in relation to the many duties she had to learn.

"She's been fantastic," said Lake of Ravelli. "She has paper trails for everything and calendars. Everything's just been open and honest."

Lake also was just elected as Wakefield Township supervisor after having served the township as clerk for several years.

She also owns Lake's Flower Cabin, a greenhouse, with her husband, Chris Lake.

"My family's used to me having to work," she said of her multiple hats. "They're all embracing it."

When her sons Joey, 10, and Samy, 7, have had to engage in distance learning because of pandemic shutdowns, their grandmother, Gana Lake, has taken charge as a retired teacher.

"It's been amazing how it's all working out," said Lake.

Ravelli said she hopes that the public - with whom she has appreciated working - will welcome Mandy in her new role. "She's going to do a great job," she assured.

In her retirement, Ravelli said she hopes to travel more and to visit with her three grandchildren in Chandler, Ariz.

"What I would like to do is maybe even get a part-time job," she said, adding that she also expects to volunteer and to spend more time outdoors.