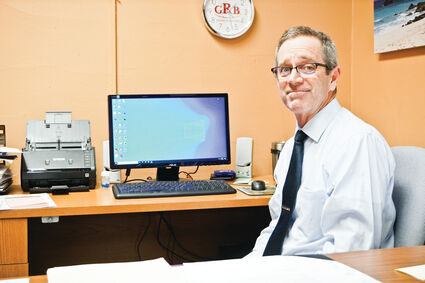 Gogebic County clerk of court and register of deeds Gerry Pelissero sits in his office at the courthouse in Bessemer. He is retiring after 20 years in the position.

Bessemer - Gerry Pelissero will retire this week after 20 years as the clerk of court and register of deeds for Gogebic County.

Pelissero took office on Jan. 1, 2000, and served five terms. He credits his staff for his role in serving the public, the various county departments and employees.

"I think first and foremost my staff, present and retired, have delivered to the residents of Gogebic County," Pelissero said.

Getting to know the various clerks and officers of the cities and townships of Gogebic County has also been a good part of the job, he said.

People sometimes think it odd when he says it but Pelissero said one of the things he enjoyed most with the job is his role in the jury trial process. People don't like being summoned to jury duty and they come in looking like they've been sent to the school principal's office, he said. But that all changes as they learn jury and trial procedure, listen to testimony and witnesses, and jury deliberations.

"When they get done they didn't like the fact that they were drawn as a juror, but it was a very satisfying experience for them," Pelissero said. "I love the voir dire selection of the jurors and the questions by the attorneys and sitting there and watching the gamesmanship between the attorneys as they're questioning a witness and presenting witnesses. That's one of the enjoyable things."

In terms of surmounting challenges related to conducting primary and general elections amidst a COVID-19 pandemic - this past year is a standout for Pelissero. The city and township clerks and precinct inspectors handled the situation well as many poll workers stayed home for being at high risk of contracting COVID-19. But just as many people stepped up to fill their shoes and the August and November elections went on without issues, he said.

"Our elections, I believe, have run as smoothly as possible and that's a testament to the local clerks, plus my training and the overall cooperation that we get from the voters as well," Pelissero said. "It's a satisfaction of a job well done when you get done with an election without any errors to be concerned with."

Some days are better than others but there is no downside to the county clerk's job, he said. The biggest challenge for Gogebic County is with finances, he said. The county commission, administrator and treasurer work hard to keep the revenue coming in to balance a budget.

"The last few years have been difficult and I know the next few years are going to be challenging as well," Pelissero said.

Ramona Collins, the current deputy register of deeds, was elected to replace Pelissero on Jan. 1, 2021. She describes Pelissero as a "true leader and an influential role model during his tenure."

"His work ethic and humor will be deeply missed and never forgotten," Collins said. "Without his example, I would not have had the courage to step up to the challenge. Gerry's shoes will be hard to fill."

Pelissero was equally full of praise for Collins, saying she knows the job "front and back" after working in the office for 29 years. Collins is someone who "doesn't get frazzled," he said.

"She's going to be great in this role," Pelissero said. "I've known her and worked with her for 20 years. I don't have to tell her how to be successful because I know she will be."

The one bit of advice that Pelissero has for Collins is to "be strong, be herself, and don't be afraid to ask for help, especially from the other 82 county clerks."

When Pelissero took office in 2001, the previous clerk, Rich Brown, was busy learning to be a freshman state legislator and didn't have time to be a mentor. Pelissero said he relied on the advice of the veteran clerks around the Upper Peninsula and in Marquette, Dickinson and Alger counties, especially.

The decision to retire came from a combination of things, he said. First, he was eligible to retire at age 60. Second, he is young and healthy enough to try something new in the next chapter of life.

"My father passed away at age 60 and that had something to do with it," Pelissero said. "He didn't enjoy his retirement and I plan on it."

Pelissero thought about retiring when he reached age 60 in 2019. But it was a presidential election year and that would have made things more difficult for the local clerks.

Pelissero and his wife, Lori, have been married 30 years. They have two daughters, Taylor, 27, who is a University of Wisconsin-Eau Claire graduate, and Caitlyn, 22, who graduated from UW-Eau Claire on Dec. 19.

While Pelissero thinks about his options he said it will be nice for a while just to spend more time doing renovations to his second home on Lake Gogebic. He has other projects to work on and will keep himself busy.

Pelissero is a lifelong Bessemer resident. He is the fourth of six boys who were raised by John and Mary Lou Pelissero - and the only son who stayed close to home.

"I always joke that with six boys, two of us were always in trouble and one of us was always grounded," he said. "I think my mother eventually just told me, 'Gerry, you're grounded for life to Bessemer.'"

That statement has dual meaning, he said. He said he was grounded to a place that has a good work ethic, a strong community, and a great place to raise a family.

"It starts with family," Pelissero said. "With what my mother and father instilled in me and making them proud."

The only time Pelissero lived outside of the county was the year after graduating from A.D. Johnston High School in 1977. He studied broadcasting at Brown Institute in Minneapolis and then returned to become a radio personality and sports director at WUPM in Ironwood.

After 10 years in radio, Pelissero moved on to become an agent with Prudential Financial for another 11 years. It was at a Rotary Club meeting in 2000 that Rich Brown, the Gogebic County Clerk at the time, announced that he was going to run for state representative.

Pelissero said he was ready for a transition and thought about running for county clerk. He felt it would be a good fit with a radio and insurance background that made him well known in the community.

"I just kind of thought, hey, let's throw my hat in the ring for county clerk in January of 2000," he said. "We worked hard to win the primary and my goal was to be the longest tenured county clerk and I am proud to say that I was able to stay in this position for 20 years."

It was a different office in 2000. The clerk communicated via phone calls and faxes. Emails and websites were primitive and now the county offices rely heavily on digital technology.

Pelissero has many fine memories from his time in the courthouse. His office is across from the county treasurer's office that used to be the probate judge office back in the 1960s. Back in the day, he would visit his grandfather, Judge Leonard J. McMannan, who was the probate judge at the time when he was a student.