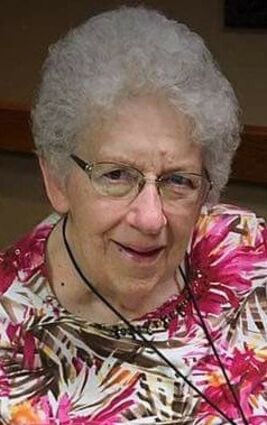 Pat was the eldest of six siblings who grew up in Vermont and Madison, Wisconsin. After graduating from Madison West High School, she matriculated at the University of Wisconsin-Madison, from which she earned a degree in home economics.

Shortly after graduation in 1954, and with a driver's license issued only two days prior, Pat drove her new car northward to embark upon a career as Iron County Extension Home Agent and 4-H Agent. Her duties ranged from running youth programs to directing the homemakers chorus. On one occasion coworkers emphasized the importance of her attending an Iron County Fair Board meeting. The matchmakers' plan went off smoothly when she met the board's eligible bachelor, Joe Cattelino.

Upon marrying, Pat joined Joe to run a new and hardscrabble dairy farm in Saxon. Married women were barred from working for Iron County at the time, so she gave up her job. However, upon her successor's departure, homemakers club members and 4-H leaders packed a county board meeting to demand that Pat be re-hired. And she was. She later resigned to focus on her household and volunteer service.

While rearing four children on farms in Saxon and Illinois, Pat seemingly could do it all. She was an excellent cook who mastered Joe's favorite ravioli, gnocchi and other Italian delicacies. She grew bountiful vegetables that she canned, froze, cooked and sold at the Iron County Farmers Market and the JOPAC Farm Market. She kept the books for the JOPAC Farm, made maple syrup, grew flowers, sewed and knitted, read voraciously, and played a mean game of Hand & Foot or Scrabble. She loved the arts, whether playing the organ for more than 40 years at St. Ann's Catholic Church in Saxon, singing in the Range Civic Chorus, learning watercolor painting or appearing in Theatre North musicals.

Pat never stopped serving and teaching others. As a 4-H leader, she instructed generations to sew, cook, and create art. She served the Council of Catholic Women, St. Ann's Guild, TEC, Koinonea, and other faith communities, tackling everything from teaching catechism to producing the church bulletin. In the late 1980s, Pat began work at the Hurley Elementary School library, where she introduced children to the wonders of books.

Over time, the JOPAC Farm shifted its focus from dairy and crops to vegetables, maple syrup, and Pat's jams and jellies, famous mint fudge, and other treats.

After Joe's 2015 death, Pat relocated to Appleton, near son, Mike, and daughter-in-law, Lynn, and family. At Carolina Assisted Living, she led a book club, judged pie contest entries, enjoyed musical performances, and offered a running commentary on the food. Her family extends special thanks to Bob Archer, life enrichment director, who made Carolina a real home.

Besides her parents, Nathanial and Mildred Allen, she was preceded in death by her husband, Joseph; a grandson, Andrew Beech; two brothers, James and Edward Allen; one sister, Sarah Allen; one son-in-law, John Beech; and several brothers- and sisters-in-law.

Cremation has taken place. Burial and a service will be scheduled for a time when it is safe to gather.

The family has chosen McKevitt-Patrick Funeral Home to honor Pat's legacy of life. You can leave a condolence or a tribute at mckevittpatrickfuneralhome.com.