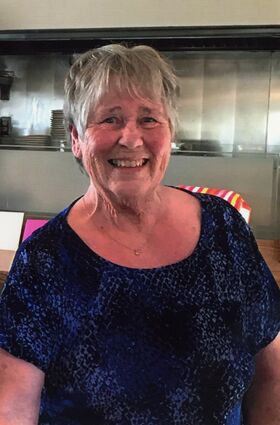 SANTA BARBARA, Calif. - Suzanne LaBerge-Backman, of Santa Barbara, formerly of Wakefield, Michigan, passed away on Thursday, Dec. 31, 2020, at the Channel Islands Post Acute Center, where she had resided for the past three years.

She was battling corticobasal degeneration for the last seven years. CBD is an incurable disease.

Suzanne was born on Feb. 7, 1941, in Redwood City, California, a daughter of Dr. Rollo and Martha LaBerge.

She married Henry Raphael Backman in 1961 in Redwood City, where she was a dental assistant for her father. She went on to be a bookkeeper at Mel's Bowl.

She then found her passion for being a daycare provider, which she did until 1976.

Suzanne and Hank moved to Wakefield with their two boys, Kirk and Brent. She then started a daycare in their home. The Backmans also were foster parents until 1980, when they purchased the Wakefield News.

She loved working with all the local businesses that supported them. They sold their business in 2006.

Her passion was working with the local community. She made herself present in the Wakefield community by being a member and later president of the Wakefield Chamber of Commerce for 10 years. She also was involved with the Wakefield Fourth of July Committee.

She was on the local committee for the Stock Outboard Nationals boat races, which were held on beautiful Sunday Lake. The first year the races were held in Wakefield, Suzanne pulled a wagon with a cooler full of Randall Bakery pasties to sell to the boaters. She later served as local chairman of the races.

Family was everything to Suzanne. She was a wonderful, caring, loving wife, mother, grandmother, great-grandmother and friend. Everyone who knew her, loved her.

Suzanne enjoyed her two cats named Heshe and Mann, and feeding and watching the deer and the birds.

Suzanne was preceded in death by her husband, Henry; and her parents, Martha and Dr. Rollo LaBerge.

Out of respect for Suzanne's wishes, cremation has taken place. There will be no visitation or funeral.

Condolences may be sent to the family of Suzanne Backman, 7126W East North Drive, Hurley, WI 54534.

There will be a one-time high school "Backman Scholarship" for a graduating Wakefield senior in 2021.