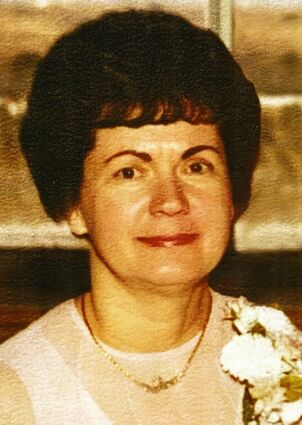 Geraldine Marie was born Dec. 3, 1933, to Joseph Baima and Esther (Herlevi) Baima in Iron Belt. She was the eldest of two daughters, her sister, Kathleen, preceded her in death. Geri attended the Pence grade school and graduated from the Lincoln High School in Hurley with the class of 1951, where she was coined "a jolly girl so full of fun and always nice to everyone."

On May 1, 1954, Geri married the love of her life, Lawrence J. Kutz, at St. Anthony's Catholic Church in Pence. They remember meeting one another for the first time at the Pence Town Hall where she was playing ping-pong while he played basketball.

Geri and Lawrence then moved to Ironwood, Michigan where she was soon busy with a growing family and assisting her husband in his business. She was an integral part of Avanti Health Systems, which served thousands of people through the years in communities from Ontonagon, Michigan to Superior, Wisconsin.

Geri was a very active member of St. Mary's Catholic Church in Hurley. She was an active part of the prayer chain and faithful attendee of Mass.

During her lifetime, Geri enjoyed deepening her faith, spending time with her family, taking photos, traveling and playing golf. She was an avid member of the Eagle Bluff Country Club and won many tournaments.

Geri is survived by and will remain in the hearts of those who loved her dearly: her husband, Lawrence; four children and their spouses, Laureen (Martin) Kutz Lipske, Sharon (George) Rubatt, John (Jean) Kutz and Larry Kutz; her grandchildren, Maleah, Meghan, Daniel, Monica, Michaela, Marisa, Pete, Melissa, Kristin, Jordan, Amanda, Angela, Andrea, Alissa, L.J. and Kyle; her 15 great-grandchildren; and nieces and nephews.

Preceding her to eternal life were her parents, Joe and Esther Baima; her sister and brother-in-law, Kathleen and Bob Barnabo; her grandson, John Kutz; her granddaughter, Kassandra Kutz; her former daughter-in-law, Anita Kutz; and her brother-in-law and his wife, Tony and Rosalie Kutz.

Geri's family would like to give special thanks to the staff at the Villa Maria Health and Rehab Center for the excellent care she received while there.

Due to COVID restrictions, a private Mass of Christian Burial will be celebrated at St. Mary's Church.

Funeral arrangements have been entrusted to Lakeside Memorial Chapel Inc., in Wakefield. Michigan.