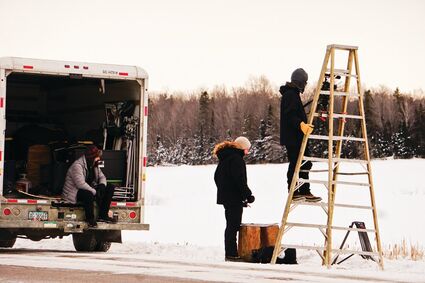 Crewmember Erick West watches at left as director Mike Cheslik and cinematographer Quinn Hester, on the ladder, shoot a scene from their comedy feature "Hundreds of Beavers," on Thursday along U.S. 51 south of Hurley. The work is focused on actor Ryland Tews who is out of the photo at right in a wetland outshoot of the Gile Flowage.

HURLEY - An independent film crew was south of Hurley on Thursday to shoot a scene for their comedy feature.

"We're filmmakers from Milwaukee," said Mike Cheslik, director of the film, "Hundreds of Beavers," a comedy feature that is two years in the making and now in production for the past nine weeks.

The story is set during the fur trade, he said. It's not focusing on the fur trade in general, but is the story of one man who goes from being an applejack distiller to learning the trade of fur trapping. He figures out how to trap beavers and bu...