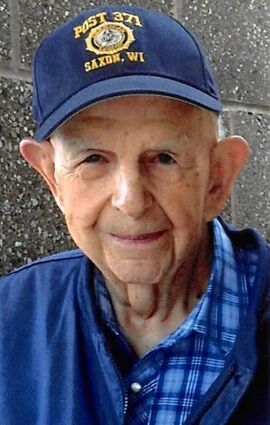 Robert grew up in Saxon with his siblings and graduated from Saxon High School. In 1945-1951, Robert left to serve his country on the boats as an able seaman. He proudly worked for Great Lakes U.S. Steel until his time in Korea from 1951-1953. Robert was honorably discharged on March 6, 1953, due to an injury in Korea. Robert returned to his passion of being on the Great Lakes as an able-body seaman until his retirement on July 1, 1982. He then continued to work part-time at Copps Grocery in Hurley for seven years.

Robert was married to Helmi (Koivisto) Aimone on May 28, 1985. Together they enjoyed going to the casino and playing cards. She preceded him in death on Dec. 1, 2006.

Robert was a member of the Mercier-Kero Saxon American Legion Post 371, VFW Post 1580 of Hurley and the Iron County Senior Association. He was an active member of the Salem Lutheran Church in Ironwood. In his earlier years, he was a volunteer at the Villa Maria during bingo afternoons with his sister, RoseAnn. He especially enjoyed his game shows and loved his Green Bay Packers.

Robert is survived by his siblings, RoseAnn Koivisto of Hurley, Joyce Routhier of Hurley, and Tony Peite of Idaho; sister-in-law, Florence Peite; and numerous nieces and nephews.

Robert was preceded in death by his parents; his wife, Helmi; and his sister, Beatrice Niemi recently on Feb. 9, 2021.

A special thank you to his sister, RoseAnn, for her heart of gold for giving Bob loving care for seven years.

No formal services are taking place for Bob at this time due to COVID-19. A private family inurnment will take place in the spring at Lakeview Cemetery in Saxon.