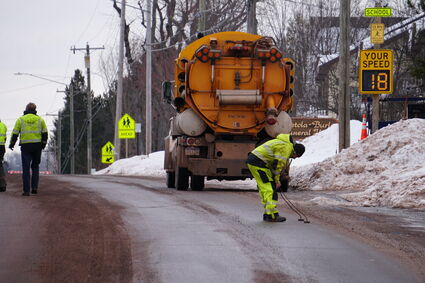 Tom LaVenture/Daily Globe A worker listens for a water line break on Wednesday morning on Ayer Street between Monroe and Curry streets in Ironwood. The break occurred on Friday morning.

IRONWOOD - Specialists have joined the city of Ironwood Public Works Department in pinpointing a water break on Ayer Street.

On Wednesday morning crews were still looking for the precise location of a water main break before they started digging.

The break occurred on Friday but city crews were unable to narrow the search to a specific area, according to Scott Erickson, city manager.

A resident in the 600 block of Ayer Street reported to city officials hearing "a running water sound in their basement," which is believed to be the broken water main in the street spilling into an adjacent sanitary pipe, said a release from the city.

"The resident's awareness helped solve this mystery much sooner than would have been possible," Erickson said. "A leak detection specialist will help pinpoint the break and then the water department will repair both the water main and sewer main starting (Wednesday)."

The work will also include inspection of the sanitary line for possible breaks, he said. The specialists will also investigate other problem lines around the city following the emergency work while they're in town, he said.